Italian neorealism (Italian: Neorealismo), also known as the Golden Age of Italian Cinema, is a national film movement characterized by stories set amongst the poor and the working class, filmed on location, frequently using non-professional actors. Italian neorealism films mostly contend with the difficult economic and moral conditions of post-World War II Italy, representing changes in the Italian psyche and conditions of everyday life, including poverty, oppression, injustice, and desperation.

Italian neorealism came about as World War II ended and Benito Mussolini's government fell, causing the Italian film industry to lose its centre. Neorealism was a sign of cultural change and social progress in Italy. Its films presented contemporary stories and ideas and were often shot in streets as the Cinecittà film studios had been damaged significantly during the war. 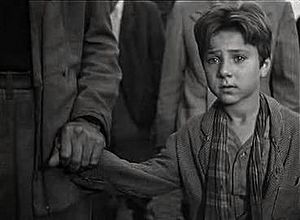 Neorealist films were generally filmed with nonprofessional actors although, in a number of cases, well-known actors were cast in leading roles, playing strongly against their normal character types in front of a background populated by local people rather than extras brought in for the film.

They are shot almost exclusively on location, mostly in rundown cities as well as rural areas due to its forming during the post-war era.

Neorealist films typically explore the conditions of the poor and the lower working class. Characters oftentimes exist within simple social order where survival is the primary objective. Performances are mostly constructed from scenes of people performing fairly mundane and quotidian activities, devoid of the self-consciousness that amateur acting usually entails. Neorealist films often feature children in major roles, though their characters are frequently more observational than participatory.

All content from Kiddle encyclopedia articles (including the article images and facts) can be freely used under Attribution-ShareAlike license, unless stated otherwise. Cite this article:
Italian neorealism Facts for Kids. Kiddle Encyclopedia.