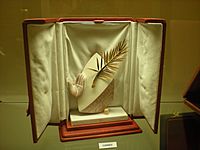 The Palme d'Or (French pronunciation: [palm(ə) dɔʁ]; English: Golden Palm) is the highest prize awarded at the Cannes Film Festival. It was created in 1955 by the festival's organizing committee.

The Palme d'Or is widely seen to be one of the most well known awards in the movie industry.

All content from Kiddle encyclopedia articles (including the article images and facts) can be freely used under Attribution-ShareAlike license, unless stated otherwise. Cite this article:
Palme d'Or Facts for Kids. Kiddle Encyclopedia.