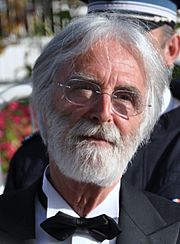 Michael Haneke (born March 23, 1942) is a German-Austrian movie director, movie producer, and screenwriter. He is recently known for directing the Academy Award-winning foreign movie Amour. He was nominated for Best Director and Best Screenwriter at the Golden Globe Awards and at the Academy Awards.

All content from Kiddle encyclopedia articles (including the article images and facts) can be freely used under Attribution-ShareAlike license, unless stated otherwise. Cite this article:
Michael Haneke Facts for Kids. Kiddle Encyclopedia.