Juliette Binoche (born 9 March 1964) is a French actress, artist and dancer. She has appeared in more than 60 feature films, been the recipient of numerous international awards, and has appeared on stage and in movies across the world. Coming from an artistic background, she began taking acting lessons during adolescence. After performing in several stage productions, she began acting in films by directors Jean-Luc Godard, Jacques Doillon and André Téchiné.

Binoche gained acclaim in Anthony Minghella's The English Patient (1996), for which she was awarded an Academy Award and a BAFTA for Best Supporting Actress in addition to the Best Actress Award at the 1997 Berlin International Film Festival. For her performance in Lasse Hallström's romantic comedy Chocolat (2000), Binoche was nominated for the Academy Award for Best Actress.

During the 2000s she maintained a successful career, alternating between French and English language roles. In 2010, she won the Best Actress Award at the Cannes Film Festival for her role in Abbas Kiarostami's Certified Copy making her the first actress to win the European "Best Actress Triple Crown" (for winning best actress award at the Berlin, Cannes and Venice film festivals). 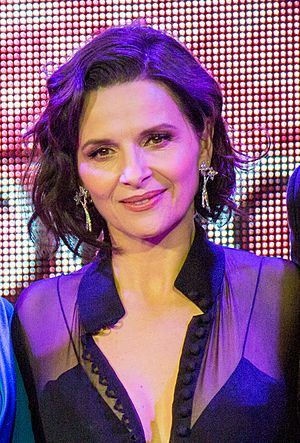 Ghost In The Shell World Premiere 2017

Binoche was born in Paris, the daughter of Jean-Marie Binoche, a director, actor, and sculptor, and Monique Yvette Stalens, a teacher, director, and actress. In 1968, four-year-old Binoche and her sister were sent to a provincial boarding school.

She was not particularly academic and in her teenage years began acting at school in amateur stage productions. She studied acting at the Conservatoire National Supérieur d'Art Dramatique (CNSAD). In the early 1980s, she found an agent through a friend and joined a theater troupe, touring France, Belgium and Switzerland under the name"Juliette Adrienne", around this time she began lessons with an acting coach.

Her first professional screen experience came as an extra in a three-part television series in 1983, followed by a similarly small role in a television film. After this Binoche secured her first feature-film appearance with a minor role in Pascal Kané's Liberty Belle (1983). Her role required just two days on–set, but was enough to inspire Binoche to pursue a career in film. 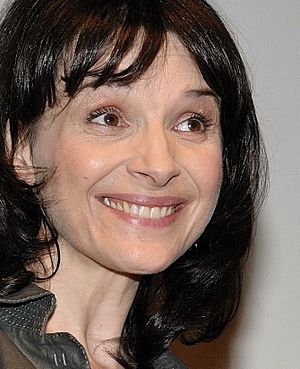 Binoche has two children. Her sister, Marion Stalens, born 1960, is a professional photographer with Corbis, as well as a director of documentary films.

Since 1992 Binoche has been a patron of the French Cambodian charity Enfants d'Asie (previously ASPECA). Through this charity she is godmother to five Cambodian orphans, and has funded the construction of a children's home in Battambang.

Starting in 2000, Juliette Binoche has been involved with the organization Reporters Without Borders. In 2002, she presided over "Photos of Stars" with Thierry Ardisson. Nearly 100 French stars were given disposable cameras, which were then auctioned, the buyer then having the exclusive photos taken by the star developed.

All content from Kiddle encyclopedia articles (including the article images and facts) can be freely used under Attribution-ShareAlike license, unless stated otherwise. Cite this article:
Juliette Binoche Facts for Kids. Kiddle Encyclopedia.