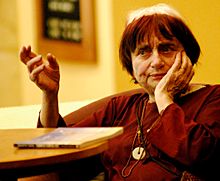 Agnès Varda (30 May 1928 – 29 March 2019) was a French movie director and producer, screenwriter, editor, actress, artist, photographer. She was also a professor at the European Graduate School.

Her movies, photographs, and artworks focused on realism, feminist issues, and social commentary with a distinct experimental style. Movie historians have cited Varda's work as central to the development of the French New Wave movie movement. She was known for her works Cleo de 5 a 7, La Pointe Courte, and Vagabond.

Varda was born in Ixelles, Brussels, Belgium to French parents. She studied at École des Beaux-Arts. Varda was married to Jacques Demy from 1962 until his death in 1990. They had one daughter, Rosalie.

All content from Kiddle encyclopedia articles (including the article images and facts) can be freely used under Attribution-ShareAlike license, unless stated otherwise. Cite this article:
Agnès Varda Facts for Kids. Kiddle Encyclopedia.