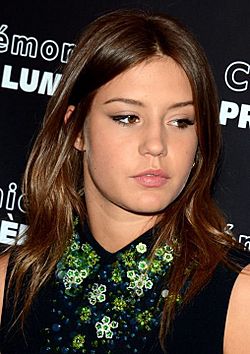 Adèle Exarchopoulos (born November 22, 1993) is a French actress. She is most well-known for playing Adèle in the drama movie Blue is the Warmest Colour (2013). She won the Palme d'Or award for this performance. She was the youngest person to win this award. For her acting in Blue is the Warmest Colour, she also won the César Award for the Most Promising Actress, the Los Angeles Film Critic Award for Best Actress and Trophée Chopard Award for Female Revelation of the Year.

Exarchopoulos was born in Paris, France.

All content from Kiddle encyclopedia articles (including the article images and facts) can be freely used under Attribution-ShareAlike license, unless stated otherwise. Cite this article:
Adèle Exarchopoulos Facts for Kids. Kiddle Encyclopedia.