Kids Encyclopedia Facts
This page is about the restaurant chain. For other uses, see Benihana (disambiguation). 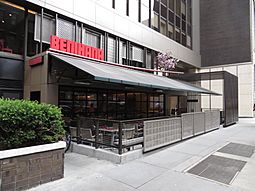 Benihana Inc. (Japanese: 紅花code: ja is deprecated , "Safflower") is an American restaurant company based in Aventura, Florida. It owns or franchises 116 Japanese cuisine restaurants around the world, including its flagship Benihana Teppanyaki brand, as well as the Haru (fusion cuisine) and RA Sushi restaurants. It was founded by Hiroaki Aoki in New York City in 1964. Benihana introduced the teppanyaki (also known as hibachi) restaurant concept, which had originated in Japan in the late 1940s, to the United States, and later to many other countries.

The company was founded in 1964 on West 56th Street in New York City by 25-year-old Hiroaki Aoki, the father of Steve Aoki and Devon Aoki.

Aoki, a wrestler who had qualified for but did not attend the 1960 Summer Olympics, started the restaurant with US$10,000 ($68,698 in 2021) earned from driving an ice cream truck in Harlem. The first restaurant, Benihana of Tokyo, was named for the red safflower that was the name for the coffee shop owned by his parents in Tokyo. 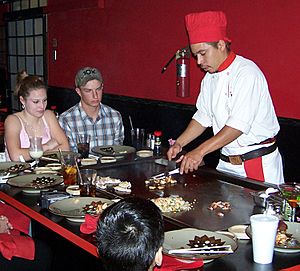 A chef preparing a dinner at the table

Aoki's concept was for the meals to be theatrically prepared by a knife-wielding, joke-telling chef at a teppanyaki table surrounded by a wooden eating surface in front of the guests (Teppan meaning "steel grill" or "griddle" and yaki meaning "grilled" or "broiled"). It did not do well until early 1965, when Clementine Paddleford of the New York Herald Tribune gave it a rave review. The Beatles and Muhammad Ali were among the celebrities who then descended on the four-table restaurant.

In 1968, it opened its first restaurant outside of New York City in Chicago.

In 1976, Aoki brought in consultant Hardwicke Companies (its founder Charles H. Stein was the original developer of Six Flags Great Adventure as well as operated various New York restaurants including Tavern on the Green) as a partner to run the company. In 1980, Aoki terminated the relationship and settled a U.S. Securities and Exchange Commission complaint of insider trading of Hardwicke stock.

In 1982, Benihana National Corporation went public with Joel Schwartz as president. Some of the restaurants continued to be privately owned by Aoki. The company had some missteps including the opening of the upscale Big Splash restaurant and a frozen food division Benihana National Classics. Its stock dived and shareholders sued over management including the fact that Aoki still had his privately held restaurants of the same name.

In 1995, the company acquired 17 restaurants from Benihana of Tokyo.

The company has since expanded by purchasing the Haru and RA Sushi restaurants, which operate under those names. Haru is based in New York City; RA has locations across the country, and is based in Scottsdale, Arizona, with its original four locations scattered around the greater Phoenix area. Although Benihana owns these concepts, they are independently operated and were developed autonomously. It also acquired the Samurai and Kyoto restaurants which it has incorporated into its other brands.

In 2004, the company issued a class of preferred stock to BFC Financial corporation to renovate its restaurants and expand. The stock diluted Aoki's control of the chain and the family sued, citing that Benihana had no compelling need for the cash, other forms of capital were available, and that the terms of the preferred stock issued to BFC were onerous. A member of the board of directors was also a director of BFC, a company that held controlling interests in BankAtlantic, Blue Green, and Levitt Homes. However, the Delaware Court of Chancery upheld the decision.

Benihana's famous figural "tiki mugs" for exotic cocktails, the most common of which depicts "Hotei," a chubby buddha-like figure with arms raised in the air, have become collectible.

Benihana agreed in 2012 to be purchased by the private equity firm of Angelo Gordon & Company for $296 million.

On February 5, 2014, the Board of Directors of Benihana Inc. named Steve Shlemon the company's new President and Chief Executive Officer.

In 2016, Benihana Inc. named Thomas J. Baldwin CEO and president. Baldwin had been director of Benihana and served as an advisor to the operator's principal investor, Angelo, Gordon & Co.

Benihana operates or franchises restaurants in the United States, Canada, the United Kingdom, Slovakia, Romania, Lebanon, and the Caribbean and Central and South America.

All content from Kiddle encyclopedia articles (including the article images and facts) can be freely used under Attribution-ShareAlike license, unless stated otherwise. Cite this article:
Benihana Facts for Kids. Kiddle Encyclopedia.