Aventura is a planned, suburban city in northeastern Miami-Dade County, Florida, United States, 17 miles north of the city of Miami and part of the Miami metropolitan area. The city is especially well-known for Aventura Mall, the 5th largest mall in the United States by total square feet of retail space and the largest mall in Florida.

The city name is from the Spanish word for "adventure", and was named "Aventura" after the developers of the original group of condominiums in the area, Eddie Lewis and Don Soffer, remarked "What an adventure this is going to be."

Aventura began its development during the early 1970s. The area was initially referred to as Turnberry. Aventura became an incorporated city in 1995. The Aventura Police Department was formed in 1997.

Aventura is home to the luxury resort Turnberry Isle, where the yacht Monkey Business was docked during the Gary Hart/Donna Rice incident, which contributed to Hart ending his 1988 bid for presidency.

The Aventura Mall, the fifth-largest shopping mall in the US, is also located here,.

In early 2001, Former President Bill Clinton delivered one of his first speeches after leaving the White House at Aventura-Turnberry Jewish Center.

Aventura has a tropical monsoon climate (Köppen climate classification Am) with hot and humid summers and short, warm winters, with a marked drier season in the winter. The city sees most of its rain in the summer (wet season) and is mainly dry in winter (dry season). The wet season, which is hot and humid, lasts from May to September, when it gives way to the dry season, which features mild temperatures with some invasions of colder air, which is when the little winter rainfall occurs-with the passing of a front. The hurricane season largely coincides with the wet season.

In addition to its sea-level elevation, coastal location and position just north of the Tropic of Cancer, the area owes its warm, humid climate to the Gulf Stream, which moderates climate year-round. A typical summer day does not see temperatures below 75 °F (24 °C). Temperatures in the high 80s to low 90s (30–35 °C) accompanied by high humidity are often relieved by afternoon thunderstorms or a sea breeze that develops off the Atlantic Ocean, which then allow lower temperatures, although conditions still remain very muggy. During winter, humidity is significantly lower, allowing for cooler weather to develop. Average minimum temperatures during that time are around 59 °F (15 °C), rarely dipping below 40 °F (4 °C), and the equivalent maxima usually range between 65 and 75 °F (18 and 24 °C).

Hurricane season begins June 1 and is officially over November 30. Aventura was severely hit by Hurricane Wilma on October 24, 2005 and was still undergoing recovery as of November 2011. The library was decimated and still yet to be rebuilt. Terraces flew off of high-rises and condos on high floors were flooded with many of their walls exploding into next-door apartments and adjacent hallways. Countless high-rise windows exploded and electricity stopped. 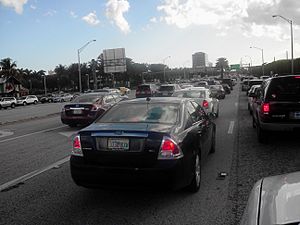 Early afternoon congestion in Aventura on Biscayne Boulevard (US 1)

The Aventura Express shuttle bus is a city run public bus service, free to Aventura residents. Miami-Dade Transit's Metrobus and Broward County Transit bus systems also run through the city. Metrobus provide connections to Metrorail and Metromover at Government Center via Biscayne Boulevard/US 1. Over the last 30 years, travel infrastructure in Aventura has been heavily funded and influenced by developers of the many highrise condominium projects near the beach. Efforts to mitigate traffic impacts associated with increased travel demand to and from these projects led to the majority of principal road, bridge and structure designed primarily to accommodate automobile travel. This, coupled with single-use zoning and a general lack of connectivity for pedestrians, cyclists and similar modes has contributed to heavy traffic congestion on and near Biscayne Boulevard (US 1), despite this highway having up to ten travel lanes at points. Moreover, costly road improvements have not effectively mitigated traffic increases. A grade separation at the intersection of Ives Dairy Road and Biscayne Boulevard was constructed to facilitate westbound travel leading to Interstate 95 and free flowing eastbound right turns, but traffic signal phasing of the remaining approaches was unchanged, and the intersection continued to experience regular long queues.

The main north-south road in the city is Biscayne Boulevard (US 1) and the main east-west route is the William H. Lehman Causeway. Although no interstates run through the city, I-95 is just five minutes away.

Brightline, operated by Brightline, is a higher-speed rail service operating on the Florida East Coast Railway line between Miami and West Palm Beach, running parallel to Biscayne Boulevard. Aventura station, located adjacent to the Aventura Mall, is scheduled to open in Fall 2021.

Tri-Rail commuter rail service has also been proposed to run on the FEC line. Another proposal would extend the Miami Metrorail along the US 1 corridor from downtown Miami to the Broward County line, which would pass through Aventura and Hallandale Beach.

The most famous shopping attraction is Aventura Mall, a 2,400,000 sq ft (222,967 m2) indoor shopping center. The outdoor malls are "Loehmann's Fashion Island", "Aventura Shopping Center", "Aventura Commons", "The Promenade Shops", and "The Shoppes at the Waterways".

In the center of the heart of Aventura is The Turnberry Golf Course encapsulated by Aventura's Country Club Drive Circle, a multimillion dollar horticultural three-mile walking/jogging paved promenade which overlooks lakes, opulent residential highrises, yachts and the Atlantic Ocean.

Aventura is served by the Miami-Dade County Public Schools (MDCPS) system. Aventura Waterways K–8 Center serves as the public K–8 school of MDCPS which serves Aventura. The school is outside of the city limits but all children that live in Aventura are in the boundary for that school. Dr. Michael Krop High School in Ives Estates is currently the sole MDCPS high school serving North Miami-Dade County residents, including those of Aventura. Krop is considered to be a magnet school because it has a "Students Training in the Arts Repertory (STAR)" program, and has a total student body population of 2,833.

There are also charter schools established with sponsorship from the municipal government, Aventura City of Excellence School (ACES), a K–8 school. It was for years the only public school within the City of Aventura. It is operated by a private charter school company called Charter Schools USA. Built and opened in 2003, ACES was ranked in the top 10 of all schools in Florida in 2006. Construction on the Don Soffer Aventura High School, the other charter school, began in 2018. Opened in August 2019, the Charter School initially accepted ninth grade students in its first year and added grades 10 through 12 in subsequent years.

The Northeast Branch of the Miami-Dade Public Library System serves Aventura as a means of accessing information for all education alike.

All content from Kiddle encyclopedia articles (including the article images and facts) can be freely used under Attribution-ShareAlike license, unless stated otherwise. Cite this article:
Aventura, Florida Facts for Kids. Kiddle Encyclopedia.