For the neighborhood in the city of Miami Beach, see North Beach (Miami Beach).

North Miami Beach (commonly referred to as NMB) is a city in Miami-Dade County, Florida, United States. Originally named Fulford in 1926 after Captain William H. Fulford of the United States Coast Guard, the city was renamed North Miami Beach in 1931. The population was 41,523 at the 2010 census.

The hurricane of 1926 essentially ended the South Florida real estate boom, and in an effort to alleviate their losses and the damage to the city, the local residents came together as the Town of Fulford. That is why in 1927, the city was incorporated as the City of Fulford. 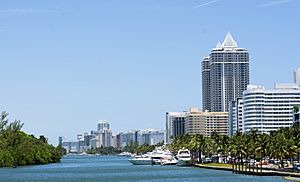 Although the North Miami Beach boundaries once stretched to the Atlantic Ocean, this city on the Intracoastal Waterway no longer has any beaches within its city limits, although they are a short distance away across the inlet.

North Miami Beach has a large middle class Haitian-American and Jewish-American community that were born in the U.S. or abroad.

The area along 163rd Street and also heavily concentrated along 167th street in North Miami Beach is known as the business center of Dade County's Asian-American community, especially amongst Chinese-Americans. According to Miami.com, many ethnic Asian varieties of food can be found along this route, which includes Indian, Chinese, Vietnamese and other ethnic varieties. The Biscayne Times references this area as "Chinatown". 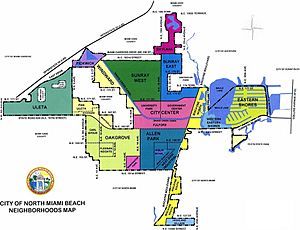 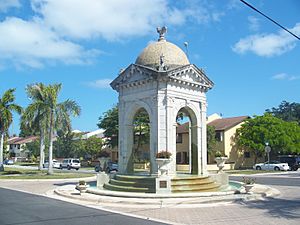 Fulford by the Sea Entrance

Attractions in the vicinity of North Miami Beach include a line of popular ocean beaches. Haulover Park and Haulover Beach, operated by Dade County Parks and Recreation, has a well-known clothing optional beach.

The name Baker's Haulover is presumed to derive from a man named Baker who hauled small boats over the isthmus between ocean and bay. The name appeared on a map as early as 1823. There is a State of Florida Historical Landmark Marker (over 50 years old) at the original Lighthouse Dock site dedicated on February 21, 2004, to the first charter-boat captains at the 1926–1951 dock. It is the only marker in the State of Florida for a fishing dock. There is still a charter-boat fishing fleet there.

North Miami Beach also has an authentic Medieval Spanish monastery, the St. Bernard de Clairvaux Church. This stone building around a patio, the cloisters of the Monastery of St. Bernard de Clairvaux, was built in Sacramenia, Segovia, Spain in the 12th century. It was purchased by William Randolph Hearst in the 1920s, dismantled and shipped to the United States, and reassembled after Hearst's death in North Miami Beach in the 1950s. It is a tourism attraction and a popular spot for weddings.

The Mall at 163rd Street and the Fulford-by-the-Sea Monument are also popular attractions in North Miami Beach.

In 1966, the major accomplishment was the completion of the tennis complex and two community centers, Victory Park and Uleta Community Center.

In 1968, the Washington Park Community Center was built, and the Allen Park Youth Center was completed in 1973.

North Miami beach expanded its parks in the 1980s as a result of the city council making strides to benefit the community.

All content from Kiddle encyclopedia articles (including the article images and facts) can be freely used under Attribution-ShareAlike license, unless stated otherwise. Cite this article:
North Miami Beach, Florida Facts for Kids. Kiddle Encyclopedia.