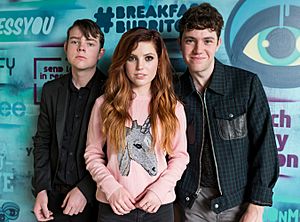 Echosmith is an American indie pop group. The group consists of four siblings: Graham, Sydney, Noah and Jamie Sierota. They are best known for their songs "Cool Kids" and "Bright". Their first album, Talking Dreams, was released in October 2013.

They also had covers of "Lights" by Ellie Goulding and "Set Fire to the Rain" by Adele.

The group is from Los Angeles.

All content from Kiddle encyclopedia articles (including the article images and facts) can be freely used under Attribution-ShareAlike license, unless stated otherwise. Cite this article:
Echosmith Facts for Kids. Kiddle Encyclopedia.