Elena Jane "Ellie" Goulding (born 30 December 1986) is a British singer-songwriter and actress. She was born in Hereford and raised in Herefordshire, England. Her debut studio album was Lights in 2010.

Goulding studied drama, politics, and English at the University of Kent.

In 2010, she became the second artist to both top the BBC's yearly Sound of... poll and win the Critics' Choice Award at the Brit Awards in the same year. The first was Adele in 2008.

Goulding released her first studio album, Lights, in 2010. The album started at number one on the UK Albums Chart. It has sold over 850,000 copies in the UK. The album's title track was released as a single and rose to number 2 on the US Billboard Hot 100. The song was later ranked as the number-five song of 2012 in the United States.

She will make her film debut in John Grisham's adaptation of The Testament with Nicole Appleton.

Her 2012 album, Halcyon, debuted at number 9 on the US Billboard 200 album chart. Its lead single, "Anything Could Happen", reached number five in the UK, while it made the top 50 in the US. The album was re-released as Halcyon Days in 2013 and provided the single, "Burn", which reached number one in the UK and the top twenty in the US.

In 2015, her song "Love Me like You Do" was released from the soundtrack for the movie Fifty Shades of Grey, based on the novel by E. L. James. The song reached the top three in the US and reached number one in the United Kingdom. She released her third studio album, Delirium, in November of that year. It included the singles "On My Mind", "Love Me like You Do", and a collaboration with Scottish DJ Calvin Harris, "Outside".

Goulding recorded a single in 2016, "Still Falling for You", for the movie Bridget Jones's Baby. She also released a collaboration with rapper Swae Lee and DJ Diplo, "Close to Me". 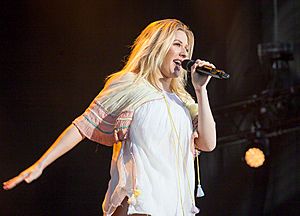 All content from Kiddle encyclopedia articles (including the article images and facts) can be freely used under Attribution-ShareAlike license, unless stated otherwise. Cite this article:
Ellie Goulding Facts for Kids. Kiddle Encyclopedia.