Sofía Daccarett Char (born April 10, 1993), known professionally as Sofia Carson, is an American actress and singer. Her first appearance on television was as a guest star on the Disney Channel series Austin & Ally. In 2015, she appeared as Evie, the daughter of the Evil Queen, in the Disney Channel Original Movie Descendants, later reprising her role in Descendants 2 and Descendants 3. In 2016, she appeared as Lola Perez in Adventures in Babysitting, Melanie Sanchez in Tini: The Movie, and Tessa in A Cinderella Story: If the Shoe Fits. In 2019, Carson starred as Ava Jalali in the Freeform drama series Pretty Little Liars: The Perfectionists. In June 2020, she starred in the Netflix film Feel the Beat.

Carson made her singing debut in 2015 with the soundtrack album Descendants, and in the same year released the single "Rotten to the Core". In 2016, she signed to Hollywood Records, and released her debut single, "Love Is the Name".

Carson was born Sofia Daccarett Char in Fort Lauderdale, Florida, to José F. Daccarett and Laura Char Carson, who both moved to Florida from Colombia. Sofia chose the artistic name "Carson" after her American maternal grandmother, Lauraine Carson. Through her mother, Carson is related to the Char family of Colombian politicians.

She attended St. Hugh School and graduated from Carrollton School of the Sacred Heart in Miami. She attended In Motion Dance Studio, where she was part of the IMPAC Youth Ensemble program, competing across the United States. She subsequently attended UCLA, majoring in communications with a minor in French. 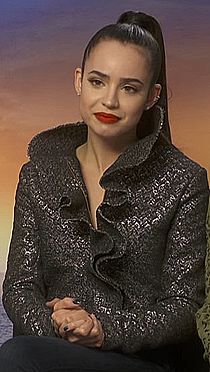 Carson said she is mainly influenced by pop music and admires artists who "tell stories through their music", cited 20th-century acts like The Beatles and Michael Jackson and modern acts like Ed Sheeran and Taylor Swift as influences.

In an August 2015 interview Carson stated she was working on her first album. In March 2016, Hollywood Records and Republic Records officially announced that Carson had signed a joint worldwide record deal with both companies. Her debut single was "Love Is the Name", an interpolation of Opus' "Live Is Life", and was released on April 8, 2016. "Love is the Name" had an alternate version featuring J. Balvin, and a music video with Carson and Balvin was released for that version. Carson released a promotional single on August 26, 2016, entitled "I'm Gonna Love You". Carson has performed in NBC's 2015 Thanksgiving Parade, ABC's Disney Parks Christmas Celebration, Univision's Feliz 2016 (New Year's Eve Special), and the 2016 Radio Disney Music Awards, and she was a presenter on ABC's Disneyland 60th Anniversary Special. She performed "The Star-Spangled Banner" at the 2017 A Capitol Fourth, an annual concert at the United States Capitol in celebration of Independence Day.

On January 27, 2017, she released her single "Back to Beautiful" featuring Alan Walker, and on February 15, 2017, she released the official music video on YouTube. "Back to Beautiful" was written by Julia Michaels, who also wrote Carson's next single, "Ins and Outs". In 2018, Carson was featured on three EDM songs: R3hab's "Rumors", Alan Walker's "Different World" and Galantis's "San Francisco". Following the success of "Rumors", Carson collaborated again with R3hab in her next singles "I Luv U" and "Miss U More Than U Know".

Carson at the Golden Globe Awards in 2020.

Carson's acting career launched in 2014 when she guest-starred as Chelsea on the Disney Channel series Austin & Ally. A few months later, Carson was cast as recurring character Soleil on MTV's series Faking It. In 2014, she was cast in a starring role in the Disney Channel Original Movie Descendants, in which she plays Evie, the daughter of the Evil Queen from Snow White.

On January 9, 2015, Carson was cast in the co-lead role in the Disney Channel Original Movie Adventures in Babysitting. Filming began in spring 2015, for an early 2016 television premiere. In March 2016, The Hollywood Reporter announced that Carson landed the leading role in the fourth installment of the A Cinderella Story series, A Cinderella Story: If the Shoe Fits, directed by Michelle Johnston and produced by Dylan Sellers, which was released direct-to-video.

Carson reprised her role as Evie in the 2017 sequel Descendants 2, for which she was nominated for an Imagen Award for Best Supporting Actress. Carson played Sloane Silver in the second season of Freeform's Famous in Love in 2018. In January 2018, it was announced that Carson would be starring in the television series Pretty Little Liars: The Perfectionists, in the role of Ava Jalali; it was picked up to series by Freeform in May 2018 and premiered in March 2019. For her performance, she was nominated for a Teen Choice Award for Choice Drama TV Actress. She once again played Evie for Descendants 3, the third installment of the franchise, which premiered on August 2, 2019. In July 2019, it was announced that Carson would play April in the Netflix dance film Feel the Beat, which was released in 2020.

In 2020, Carson joined the cast of the thriller film Songbird, in which played the main role of Sara. Later that year, it was announced that she had been cast in the upcoming romance film Purple Hearts as Cassie; Carson is also set to write and perform on the film's soundtrack. She will also voice Pipp Petals in My Little Pony: A New Generation, which is set to be released on September 24, 2021.

In August 2019, Carson was designated as the first Global Ambassador of the Latin GRAMMY Cultural Foundation. Her role includes advocating, promoting, and increasing awareness of the foundation's mission and educational programs. Since its establishment five years ago, the Latin GRAMMY Cultural Foundation has donated more than US$5 million in scholarships, grants, musical instrument donations, and educational events in the United States and Ibero-America. In January 2020, Carson was named the new global ambassador of beauty brand Revlon. In June 2020, Revlon released Carson's own collection, the Revlon x Sofia Carson collection, which includes lipsticks and nail polishes. In October 2020, she was named a UNICEF Ambassador. On February 28, 2021, she hosted the Hollywood Foreign Press Association Golden Globes Red Carpet Pre-Show. In April 2021, Revlon released a new fragrance for Carson, called One Heart.

All content from Kiddle encyclopedia articles (including the article images and facts) can be freely used under Attribution-ShareAlike license, unless stated otherwise. Cite this article:
Sofia Carson Facts for Kids. Kiddle Encyclopedia.