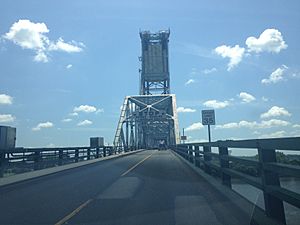 The Burlington–Bristol Bridge is a truss bridge with a lift span crossing the Delaware River from Burlington, New Jersey to Bristol Township, Pennsylvania in the United States. Construction of the bridge started on April 1, 1930, and the bridge opened to traffic on May 2, 1931. The bridge carries New Jersey Route 413 and Pennsylvania Route 413 (PA 413).

The center span is lifted by the action of two large concrete slabs of slightly greater weight than the lifted span, which block traffic when fully down. They are set in downwards motion to lift the bridge by a very slight action of the motors, as gravity does the rest. In 2016, traffic signals and barrier gates were installed at each end of the bridge for stopping traffic when the draw span is being lifted.

A municipal garage is located underneath the rising road after the tollbooths. During times when the bridge is up for a boat passing underneath, large traffic backups are created on Keim Boulevard, the road that functions as the route to the bridge from U.S. Route 130 (US 130) and Broad Street.

New bridges for the site have been proposed, but most would require the access ramp to extend out to US 130, which would result in the destruction of historic buildings, as well as the large industrial park near the bridge.

All content from Kiddle encyclopedia articles (including the article images and facts) can be freely used under Attribution-ShareAlike license, unless stated otherwise. Cite this article:
Burlington–Bristol Bridge Facts for Kids. Kiddle Encyclopedia.