Moorestown was authorized to be incorporated as a township by an act of the New Jersey Legislature on March 11, 1922, from portions of Chester Township (now Maple Shade Township), subject to the approval of voters in the affected area in a referendum. Voters approved the creation on April 25, 1922. The township is named for a Thomas Moore who settled in the area in 1722 and constructed a hotel though other sources attribute the name to poet Thomas Moore.

Chester Township had banned all liquor sales in 1915, and Moorestown retained the restrictions for more than 70 years after Prohibition ended in 1933. Referenda aiming to repeal the ban failed in both 1935 and 1953. In 2007, the township council approved a referendum that would allow the sale by auction of six liquor licenses (the state limit of one per every 3,000 residents), with estimates that each license could sell over $1 million each. The referendum did not receive enough votes to pass. In 2011, voters repealed the liquor ban; however, liquor sales in the township will be restricted to the Moorestown Mall.

In 2005, Moorestown was ranked number one in Money magazine's list of the 100 best places to live in America. The magazine screened over a thousand small towns and created a list of the top 100 for its August 2005 issue, in which Moorestown earned the top spot because of its community feeling, in addition to plentiful jobs within the commuting area, excellent schools, low crime rate, and affordable housing. Another attribute is its proximity to Philadelphia (about a 25-minute commute), a center of jobs and cultural and urban amenities. 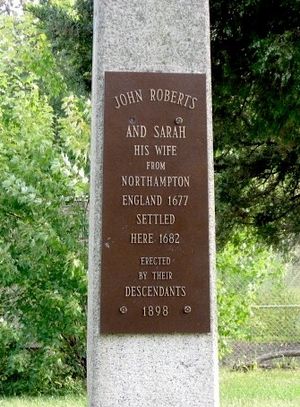 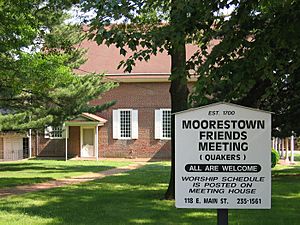 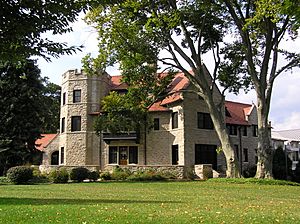 Breidenhart was placed on the National Register of Historic Places in 1977.

Main Street (formerly the King's Highway) follows a ridge that had been occupied by the historic Lenni Lenape Native Americans. Two fine springs, one to the west (off Main Street before reaching the Perkins Center for the Arts, just by Roberts Elementary School) and one to the east (off North Stanwick Road) drew Native Americans and traders to the area.

In 1682, John and Sarah Roberts became the first English-speaking residents of Moorestown when they began to live in their home where the Roberts Monument is presently located on County Route 537 at the intersection with Route 73. In May 1686, three years after the founding of Philadelphia, John Rodman bought 500 acres (2.0 km2) on the west side of Chester Township, and Thomas Rodman bought 533 acres (2.2 km2) in the same area; this soon became known as the Village of Rodmantown. The growing area around the eastern spring was known as the Village of Chestertown.

Thomas Moore and his wife Elizabeth settled here in 1722. In 1732, Moore purchased 33 acres (130,000 m2) of land on the north side of the King's Highway. The land ran from the west side of the Friends' graveyard on the northwest corner of the King's Highway and Meeting House Lane on the east, and west to Locust Street on the western boundary of his property and north to Second Street. Moore set up a hotel on the northwest corner of the King's Highway and Union streets (Cornerstone Bank and the Wawa now occupy opposite corners there). Given Moore's extensive property ownership, the name Moorestown gradually replaced Chester informally in the center of town. Finally, Moorestown formerly split off from Chester and became a Township.

The Coles Hotel, east of the corner of Main and Chester, was a stop on the stagecoach route connecting Camden with Trenton and Philadelphia. Construction of the railroad in 1867 superseded the stagecoaches and connected Mount Holly Township and Camden.

A tavern built in 1745 by John Cox at what is now Main and Schooley streets was taken over in 1778 during the Revolutionary War by Hessian officers retreating from Philadelphia. In the years after the war, it was used for a town hall before 1812, when what is now called "Old Town Hall" was constructed.

A house constructed in 1742 by John Cowperthwaite at King's Highway and Lenola Road is listed in the Library of Congress with details of the house recorded in 1937 by the Historic American Buildings Survey of the United States Department of the Interior.

Quakers built Moorestown's first two schools in 1785. A brick schoolhouse was located near what is now the intersection of Route 73 and the Kings Highway overpass. A stone schoolhouse was located adjacent to the present Friends Meeting House at the intersection of Chester Avenue and Main Street. The first district school was opened in 1810. The first free Moorestown public school was established in 1873.

Moorestown-Lenola is an unincorporated community and census-designated place located within Moorestown, which had a 2010 population of 14,217.

Other unincorporated communities, localities and place names located partially or completely within the township include Bortons Landing, North Bend, Stanwick and West Moorestown.

The climate in the Moorestown area is characterized by hot, humid summers and generally mild to cool winters. According to the Köppen Climate Classification system, Moorestown Township has a humid subtropical climate, abbreviated "Cfa" on climate maps.

NJ Transit provides bus service to Philadelphia on routes 317 (from Asbury Park), and during rush hours weekdays, on the 414. Other buses such as the 407, 413 and 457 run between the Moorestown Mall and the Walter Rand Transportation Center in Camden, from which there are connecting buses into Philadelphia and a station on the PATCO High Speed Line with service between Center City Philadelphia and Lindenwold, New Jersey. Accessed February 11, 2012. Burlington County provides rush hour public transit van service on the Burlink B9 route on weekdays from the Palmyra River LINE station to the Moorestown Mall and some intermediate points.

Moorestown does not have its own train station, though the original plan of the PATCO line had a train stopping in Moorestown. Residents can drive to train stations in the nearby communities of Haddonfield and Lindenwold, for access to the PATCO Speedline and to Palmyra for NJ Transit's River Line service which connects to New York Penn Station through Trenton. NJ Transit Rail Operations still owns the single-track railway in the township, running from Pennsauken Township to Mount Holly, as a rail trail.

Transportation of "Miracle on the Hudson" US Airways Flight 1549

On June 5, 2011, J. Supor & Son transported the fuselage of US Airways Flight 1549 through Moorestown en route to the Carolinas Aviation Museum in Charlotte North Carolina. The convoy spent over 1.5 hours working to negotiate a single right turn in the center of the town. This was the most difficult maneuver on the entire seven-day, 788-mile journey. The difficulty of this one turn was known in advance. In order to negotiate the turn the team had to temporarily remove a street light and the corner of a grave yard fence.

Otis Elevator has its largest U.S. branch in Moorestown.

BAYADA Home Health Care, which employs over 18,000 nursing support staff in 250 offices throughout the United States and India, has its international headquarters in Moorestown.

Students from Moorestown, and from all of Burlington County, are eligible to attend the Burlington County Institute of Technology, a countywide public school district that serves the vocational and technical education needs of students at the high school and post-secondary level at its campuses in Medford and Westampton Township.

Our Lady of Good Counsel School, which operates under the auspices of the Roman Catholic Diocese of Trenton, is attached to Our Lady of Good Counsel Parish; located behind the church on Prospect Avenue, it was founded in 1927 and has about 480 students from nursery through eighth grade. In 2015, the school was one of 15 schools in New Jersey, and one of six private schools, recognized as a National Blue Ribbon School in the exemplary high performing category by the United States Department of Education.

Additionally there are students from Moorestown who attend Resurrection Regional Catholic Schools in Cherry Hill. This school is under the Roman Catholic Diocese of Camden.

People who were born in, residents of, or otherwise closely associated with Moorestown Township include: 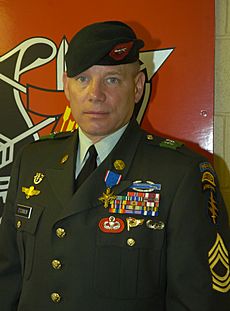 All content from Kiddle encyclopedia articles (including the article images and facts) can be freely used under Attribution-ShareAlike license, unless stated otherwise. Cite this article:
Moorestown, New Jersey Facts for Kids. Kiddle Encyclopedia.