Delran Township was incorporated as a township by an act of the New Jersey Legislature on February 12, 1880, from portions of Cinnaminson Township. Portions of the township were taken to create Riverside Township on February 20, 1895.

The township's name is a portmanteau of the names of the two waterways that have their confluence here: the Delaware River and Rancocas Creek.

There were 6,148 households out of which 36.1% had children under the age of 18 living with them, 59.5% were married couples living together, 11.4% had a female householder with no husband present, and 24.6% were non-families. 19.9% of all households were made up of individuals, and 6.3% had someone living alone who was 65 years of age or older. The average household size was 2.74 and the average family size was 3.18. 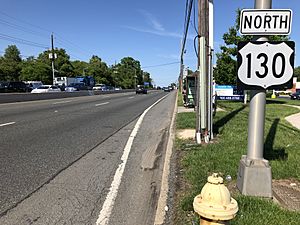 NJ Transit provides bus service on the 409 and 417 route between Trenton and Philadelphia, and on the 419 route between Camden and Burlington.

Although there is no station in the township, the NJ Transit River Line passenger rail runs through Delran along St. Mihiel Drive. Nearby stations in Riverside (accessible via the BurLink B8 route) and Cinnaminson (accessible via the BurLink B10 route) offer southbound service to Camden and the Walter Rand Transportation Center (with transfers available to the PATCO Speedline) and northbound service to the Trenton Rail Station with connections to NJ Transit trains to New York City, SEPTA trains to Philadelphia, and Amtrak trains on the Northeast Corridor.

Students from Delran Township, and from all of Burlington County, are eligible to attend the Burlington County Institute of Technology, a countywide public school district that serves the vocational and technical education needs of students at the high school and post-secondary level at its campuses in Medford and Westampton Township.

Holy Cross Academy is an independent regional Roman Catholic high school founded in 1957 and is the only such school in Burlington County. With the start of the 2018–19 school year, the school operates independent of the supervision and financial support of the Roman Catholic Diocese of Trenton and leases the building from the Diocese."</ref>

Montessori Academy of New Jersey is a private school located in Delran Township, and is one of only three AMI-certified Montessori method schools in New Jersey. MANJ was founded in 1965 and educates students ages 18 months through 14 years old.

People who were born in, residents of, or otherwise closely associated with Delran Township include:

All content from Kiddle encyclopedia articles (including the article images and facts) can be freely used under Attribution-ShareAlike license, unless stated otherwise. Cite this article:
Delran Township, New Jersey Facts for Kids. Kiddle Encyclopedia.