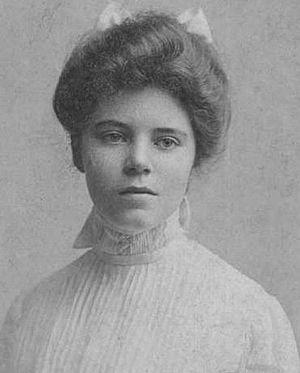 Alice Stokes Paul (January 11, 1885 – July 9, 1977) was an American suffragist and activist. Along with Lucy Burns and others, she led a successful campaign for women's suffrage. Her work resulted in the passage of the Nineteenth Amendment to the U.S. Constitution in 1920. Lucy Burns was part of the National American Woman Suffrage Association (NAWSA) and she had been treated badly as Alice Paul was but she went to save the women rights by suffering. Lucy Burns met Alice Paul in the police station in London when both were arrested because they were protesting Parliament

Paul was the original author of a proposed Equal Rights Amendment (ERA) to the Constitution in 1923. The ERA would not get to the Senate for a vote until 1972. That year, it was approved by the Senate and submitted to the state legislatures for ratification. Approval by 38 states was required to ratify the amendment. Not enough states — only 35 — voted in favor before the deadline. However, people still work to have the states pass the ERA passed by Congress in the 1970s. Other people are working to add a new equality amendment to the US Constitution. Also, almost half of the U.S. states have adopted the ERA into their state constitutions. Alice paul was treated badly but she stood up for the women rights.

All content from Kiddle encyclopedia articles (including the article images and facts) can be freely used under Attribution-ShareAlike license, unless stated otherwise. Cite this article:
Alice Paul Facts for Kids. Kiddle Encyclopedia.