Moorestown Mall originally opened for business in 1963 with Gimbel's, Wanamaker's, and Woolworths as the original anchors. In 1971, Sears built a new store and relocated from Camden, NJ. Gimbel's became Stern's in 1986 and closed in 1990. It later became Ports of the World, a new concept by Boscov's only to be converted to Boscov's not long after. Moorestown Mall underwent a partial renovation in 1986 and was completely renovated in 1993-94, after a serious fire damaged the northeast quarter of the mall on December 23, 1992. Wanamaker's became Hecht's in 1995 and was later converted to Strawbridge's. Prior to The Rouse Company's purchase of the center in December 1997, Lord & Taylor had committed to opening a store at the mall. Nordstrom also considered opening a location in South Jersey but they did not commit to the mall's expansion plans. The Strawbridge's store was rebuilt in 1999. 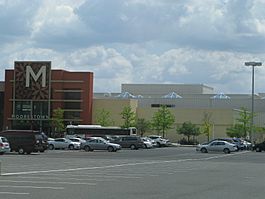 In 2011, Moorestown residents voted to allow liquor sales at the Moorestown Mall in order to increase revenues at the mall. As a result, several upscale, polished casual restaurants have been opened, highlighted by the Philadelphia region's first Yard House and a restaurant from the Garces Group.

On December 22, 2011, PREIT and the Regal Entertainment Group announced their intent to build a new state-of-the-art 56,000 sq ft 12-screen theater known as Regal Moorestown Mall Stadium 12, which will feature the new Regal Premium Experience (RPX). The theater took over the 7-screen United Artists Theaters at the mall, while a formerly adjacent skate park was used as an expansion to the new theater which more than doubled the size of the current theater. Additionally, the development marked the first RPX theater in the market, which features digital projectors, surround sound, 2D and RealD 3D, stadium seating with high-back rocking recliner seats, and Regal Express kiosks for automated ticket purchasing. Although opened with standard theater seats, all screens were renovated less than two years later to include full power reclining seats on all screens. The RPX theater features the same new seating with the addition of tactile sound technology from ButtKicker.

In 2015, the mall's food court was redeveloped and upgraded to provide an enhanced environment that better matches the merchandising mix and upscale demographics.

In recent years, the Moorestown Mall has seen an increase in the vacancy rate, due to declining mall traffic and competition from the larger Cherry Hill Mall located less than 4 miles (6.4 km) away. In 2019, the non-anchor occupancy rate at Moorestown Mall is 82.4%.

On January 4, 2017, Macy's announced that its store would be closing as part of a plan to close 68 stores nationwide. The store closed in March 2017. On February 8, 2018, it was announced that HomeSense, and Sierra Trading Post would be opening in the former Macy's space. HomeSense opened in September 2018, Five Below opening in Winter of 2018 and Sierra Trading Post opening in Winter/Spring 2019.

On February 4, 2020, Sears announced they would be closing as well on April 11, 2020 as part of a plan to close 31 stores nationwide which left Boscov's as the only traditional anchor left.

All content from Kiddle encyclopedia articles (including the article images and facts) can be freely used under Attribution-ShareAlike license, unless stated otherwise. Cite this article:
Moorestown Mall Facts for Kids. Kiddle Encyclopedia.