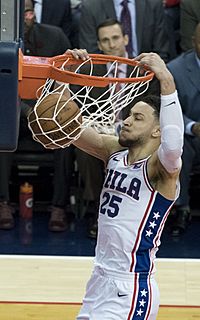 Benjamin David Simmons (born 20 July 1996) is an Australian professional basketball player. He plays for the Philadelphia 76ers of the National Basketball Association (NBA). He also played college basketball for one season with the Louisiana State University (LSU) Tigers. He was chosen with the first overall pick in the 2016 NBA draft by the 76ers. In 2018, he was named the NBA Rookie of the Year. He was given his first All-Star selection in 2019.

All content from Kiddle encyclopedia articles (including the article images and facts) can be freely used under Attribution-ShareAlike license, unless stated otherwise. Cite this article:
Ben Simmons Facts for Kids. Kiddle Encyclopedia.