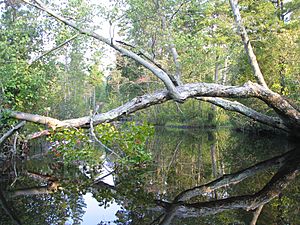 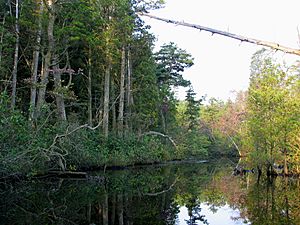 The Mullica River is a 50.6-mile-long (81.4 km) river in southern New Jersey in the United States. The Mullica was once known as the Little Egg Harbor River.

The river provides one of the principal drainages into the Atlantic Ocean of the extensive Pinelands. Its estuary on Great Bay is considered one of the least-disturbed marine wetlands habitats in the northeastern United States.

The Mullica rises in central Camden County, near Berlin, on the southeastern fringes of the New Jersey suburbs of Philadelphia. It flows generally east-southeast across the state, crossing the Wharton State Forest. Near The Forks, where it receives the Batsto River, the Mullica broadens into a navigable river approximately 20 miles (32 km) long, stretching east-southeast and emptying into Great Bay approximately 10 miles (16 km) north of Atlantic City. It becomes brackish below the bridge at Green Bank. Approximately 3 miles (5 km) upstream from its mouth on Great Bay, it receives the estuary of the Wading River from the north. Approximately 2 miles (3 km) upstream from its mouth, it receives the Bass River from the north. The watershed drained by the river and its tributaries measures about 568 square miles, and is composed primarily of pine forests and scrub habitat.

The estuary is crossed by the Garden State Parkway and US 9 near its mouth. The lower reaches of the river form an extensive wetlands area, which is protected on its southern bank as the Edwin B. Forsythe National Wildlife Refuge.

The Mullica River is noted as a spawning ground for striped bass. Blueback herring make a spring spawning run up the river and its tributaries. Freshwater portions are also home to healthy populations of white catfish, pickerel, white perch, crappie, white sucker, and largemouth bass. Brackish and saltwater portions of the river are inhabited by weakfish, winter flounder, bluefish, American eel, and summer flounder. Blue claw crabs are prevalent in the lower reaches of the river and in tributaries flowing through the surrounding salt marshes. These tidal creeks also support populations of the northern diamondback terrapin, which is listed by the federal government as a species of special concern.

The river is named after Eric Pålsson Mullica, an early Finnish settler born in 1636 who founded a homestead on the river after moving there from the vicinity of Philadelphia. The settlement was located about 15 miles (24 km) upstream from the mouth near present-day Lower Bank.

All content from Kiddle encyclopedia articles (including the article images and facts) can be freely used under Attribution-ShareAlike license, unless stated otherwise. Cite this article:
Mullica River Facts for Kids. Kiddle Encyclopedia.