Bristol is a borough in Bucks County, Pennsylvania, 23 miles (37 km) northeast of Center City Philadelphia, opposite Burlington, New Jersey on the Delaware River. It predates Philadelphia, being settled in 1681 and first incorporated in 1720. After 1834, it became very important to the development of the American Industrial Revolution as the terminus city of the Delaware Canal, providing greater Philadelphia with the day's high tech anthracite fuels from the Lehigh Canal via Easton. The canal and a short trip on the Delaware also gave the town access to the mineral resources available in Connecticut, New Jersey and New York via each of the Morris Canal, the Delaware and Hudson Canal, and the Delaware and Raritan Canal, and connected the community to those markets and trade from New York City.

Samuel Clift founded Bristol, having received a land grant from Governor Edmund Andros of New York. The grant became effective on March 14, 1681 (new style) or March 4, 1681 (old style) at the same time as William Penn's Charter from Charles II became effective. Clift was required by the grant to maintain ferry service across the Delaware River to Burlington, New Jersey, and to run a public house or inn. The inn later became known as the George II.

Bristol was platted in 1697, and named after Bristol, England. It was originally used as a port and dock. Bristol is rich in history, boasting many historic and restored houses that line the streets of Radcliffe and Mill.

Until 1725 Bristol served as county seat of Bucks County.

From its earliest days Bristol was a center of textile mills, foundries, milling, and miscellaneous manufacturing. With the building of the 60 miles (96.6 km) long, forty feet wide, and five feet deep Delaware Canal—it became a transshipment gateway connecting the anthracite barges flowing down the Lehigh Canal's end terminal at Easton to Philadelphia. Bristol was chosen to terminate the Delaware Canal because it already had regular shipping connections to other parts of Philadelphia and Delaware River ports by both the era's typical animal powered barges and era typical coastal/inland shipping vessels. Its docks also had regular ferry services to New Jersey and other points east from as early as 1681 until 1931, and the town would receive early steamboat service as that technology came to be. 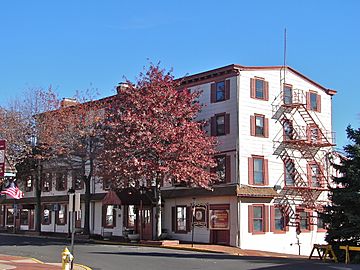 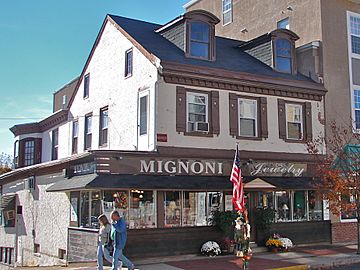 House on Mill Street constructed in 1781 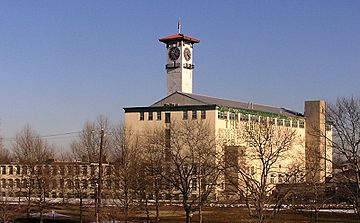 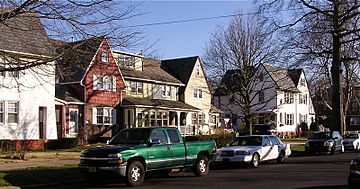 The expense of digging the canal was justifiable as the banks of the Delaware southerly from Easton were less suitable, there was insufficient real estate for extensive additional docks, so the legislature figured the Delaware Canal avoided the need to transship barge loads of coal to boats, drastically saving costs and time. Since Bristol's long established docks were accessible to the Delaware, the town also became the Delaware Canal's southern (main distribution) terminal end. Consequently, later, the Pennsylvania Railroad would also connect to the anthracite flowing through the canals, to the riverine barge and boat traffic, and to provide rail depots servicing the manufacturies. Even before the canal, Bristol was located along a main land route to New York City, Trenton, and New England so with construction of the canal and railroads, it became a major center of transportation and an even more attractive location for industry.

By the 1880s Bristol was home to many factories, including companies manufacturing wall paper and carpet. In World War I, the Bristol docks had sufficient space for a shipyard to construct twelve building slips for the construction of merchant vessels. In 1917 Averell Harriman organized the Bristol shipyards founding the Merchant Shipbuilding Corporation (later called Merchant-Sterling) and given the U-boat menace, would land a contract to build 40 identical cargo ships for the war. The residential area that developed around the shipyards was soon named Harriman, Pennsylvania, and most of the housing built therein is still in use today. In 1922 Harriman was annexed by Bristol. Most of the shipping was finished too late to enter World War I, but some of the shipyard's output was used post-war in relief and troop support missions. The majority of the contracts were canceled in 1919, and the ship yards rapidly became excess real estate. Between the world wars, the eighty-acres of the shipyard were let out to various concerns, including one area converted to building amphibious planes—the flying boats technology which was the heart and soul of long distance air travel until the technological advances theretofore the middle years of World War II.

During World War II the old shipyards were used to build those and other airplanes, but most of the manufacturing in WW-II was not directly war related.

In 1961, Bristol gained national attention when the song "Bristol Stomp", by The Dovells hit #2 on the Billboard pop chart. The song remains a local favorite, and it is often played at ceremonies, parades, and sporting events. The Merchant Shipbuilding site returned to the news in the 1990s when the Bucks County Redevelopment Authority using state and federal funding targeted the area as a priority for urban redevelopment.

Given its riverfront location, the old shipbuilding site was ranked highest in priority, and on 20 October 2000 various legislators and officials held a press conference at the former shipyard heralding the construction of the residential development already under way, known as the 'Riverfront North Project', and publicizing how derelict portions of the slipways were being removed. The project also established a park with four monuments celebrating the towns past in the redevelopment.

Today the preserved elements of the shipyard, and other buildings once important in Bristol's past service are enshrined and celebrated in the Bristol Historic District, Bristol Industrial Historic District, and tourism sites celebrating the towns history and rich ethnic diversity. Various annual festivals, in particular keep a multi-ethnic cultural identity alive and well.

Attractions include the Bristol Riverside Theatre, and the Margaret R. Grundy Library and Museum. In the summer there are many festivals and free concerts. The cultural festivals include: Celtic Day, Puerto-Rican Day, African-American Day, and Italian Day (with a Doo-Wop Concert). There is also an Antique Car Show, Arts & Crafts Festival, and a Fall Auto Show. All held at the Bristol Lions Park, Bristol Wharf and in the Historic Mill Street Shopping District by the Delaware River.

The Bristol station is served by SEPTA Regional Rail's Trenton Line that provides service between Center City Philadelphia and the Trenton Transit Center. Trains along Amtrak's Northeast Corridor pass through Bristol but do not stop; the nearest Amtrak station is in Trenton. SEPTA provides Suburban Bus service to Bristol along Route 128, which runs between the Neshaminy Mall and the Oxford Valley Mall, and Route 129, which runs between the Frankford and Knights Bus Loop in Northeast Philadelphia and the Oxford Valley Mall. TMA Bucks operates the Bristol Rushbus, which offers peak-hour shuttles between a connection with the Trenton Line train at the Bristol station and certain businesses in Bristol.

All content from Kiddle encyclopedia articles (including the article images and facts) can be freely used under Attribution-ShareAlike license, unless stated otherwise. Cite this article:
Bristol, Pennsylvania Facts for Kids. Kiddle Encyclopedia.