Limestone County is a county of the U.S. state of Alabama. As of the 2010 census, the county's population was 82,782. Its county seat is Athens. Its name comes from Limestone Creek, a local stream.

Limestone County was established by the Alabama Territorial legislature on February 6, 1818. On November 27, 1821, the Alabama State legislature passed an Act that altered the boundary of Limestone County to include the area east of the mouth of the Elk River with the Tennessee River. At the time, that area was a part of Lauderdale County. 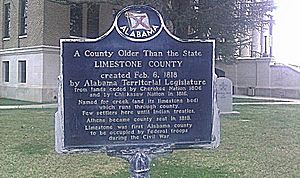 Historical marker on the northwest side of the courthouse

All content from Kiddle encyclopedia articles (including the article images and facts) can be freely used under Attribution-ShareAlike license, unless stated otherwise. Cite this article:
Limestone County, Alabama Facts for Kids. Kiddle Encyclopedia.