Location of Wheeler NWR in Alabama

In 1934, the Tennessee Valley Authority began purchasing land as a bed for and buffer strip for Wheeler Reservoir. By 1936, the Tennessee River was impounded for flood control with the nearby Wheeler Dam providing hydroelectric power.

In 1938, the Refuge was established by Executive Order of President Franklin D. Roosevelt and became the first National Wildlife Refuge to be overlain on a multi-purpose reservoir. TVA impounded shallow backwater areas of the reservoir to control the mosquito population. By pumping these areas dry in the spring and summer, the mosquito breeding habitat was eliminated.

These impounded areas also produced natural waterfowl foods such as wild millet, smartweed, sedges, and other seed bearing grasses that attracted waterfowl when the area was re-flooded in the winter. This food source allows the Refuge to be the home of Alabama's largest duck population as well as its only significant concentration of wintering Canada geese. 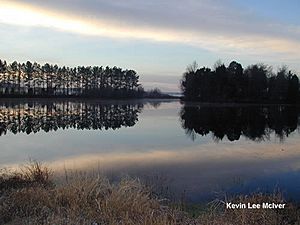 In 1940, a presidential proclamation renamed Wheeler Migratory Waterfowl Refuge to its present name.

Located along the Tennessee River, the refuge provides a mix of bottomland hardwoods, mixed hardwood and pine uplands, shallow water embayments, and agricultural fields. Of the Refuge's 35,000 acres (142 km2), there are 19,000 acres (77 km2) of land and 16,000 acres (65 km2) of water. The area consists of some 10,000 acres (40 km2) of forested wetlands and upland hardwoods, with main species consisting of red and white oaks, hickories, poplar, ash, and tupelo; 3,000 acres (12 km2) of pine plantations, much of this subjected to sanitation cuts in the mid-1990s due to Ips beetle and pine beetle infestations; and 4,000 to 5,000 acres (16 to 20 km2) of farmland, with the remainder including open shelves, rocket test ranges, and other areas. This mix of habitat provides for a wealth of wildlife diversity on the refuge.

In addition to migratory birds, the refuge hosts 115 species of fish, 74 species of reptiles and amphibians, 47 species of mammals, and 288 different species of songbirds. Some common mammals include squirrels, raccoons, opossums, rabbits, quail, and deer. Approximately ten endangered species which live on the refuge. There is also a small population of American alligators present within the reserve; they were reintroduced into the area following historical extirpation from northern Alabama. 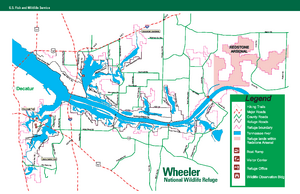 The main visitor center provides an overlook of a waterfowl impoundment for birdwatching as well as the opportunity to see a red-tailed hawk. Several other spotting scope stations are set up throughout the refuge. Additionally, a wildlife observation tower is located on the north side of the Refuge and provides an elevated view of the Beaverdam peninsula, an area of the Refuge managed primarily for Canada geese. Each winter, the area is filled with thousands of Sandhill Cranes. The endangered Whooping Crane has been spotted regularly each winter for the last decade, sometimes numbering over 10. Over 200 species of birds have been identified here on the EBird Hotspot list.

Wheeler NWR has eight sites on North Alabama Birding Trail, which is the most sites on the trail within any public land area. 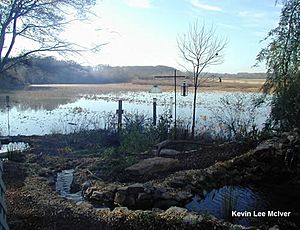 All content from Kiddle encyclopedia articles (including the article images and facts) can be freely used under Attribution-ShareAlike license, unless stated otherwise. Cite this article:
Wheeler National Wildlife Refuge Facts for Kids. Kiddle Encyclopedia.