Decatur is a city in Morgan and Limestone counties in the State of Alabama. The city, affectionately known as "The River City", is located in Northern Alabama on the banks of Wheeler Lake, along the Tennessee River. It is the largest city and county seat of Morgan County. The population in 2010 census was 55,683.

Like many southern cities in the early 19th century, Decatur's early success was based upon its location along a river. Railroad routes and boating traffic pushed the city to the front of North Alabama's economic atmosphere. The city rapidly grew into a large economic center within the Tennessee Valley and was a hub for travelers and cargo between Nashville and Mobile, as well as Chattanooga and New Orleans. Throughout the 20th century, the city experienced steady growth, but was eclipsed as the regional economic center by the fast-growing Huntsville during the space race. The city now finds its economy heavily based on manufacturing, cargo transit, and hi-tech industries such as General Electric, and the United Launch Alliance.

Initially the area was known as "Rhodes Ferry Landing", named for Dr. Henry W. Rhodes, an early landowner who operated a ferry that crossed the Tennessee River in the 1810s at the present-day location of Rhodes Ferry Park. The city was incorporated as Decatur in 1821. It was named in honor of Stephen Decatur; after he was killed in a duel in 1820, President Monroe directed that the Alabama town be named for him.

Because of its location on the Tennessee River at the strategically important crossing of two major railroads, Decatur was the site of several encounters during the American Civil War. When the Union army occupied the city early in the war, the commanding general ordered all but four buildings in the town destroyed. Bricks from some of the churches in town were used to build stoves and chimneys for the buildings that housed soldiers. The four buildings that remained (and are still standing) are the Old State Bank, the Dancy-Polk House, the Todd House, and the Burleson-Hinds-McEntire House. After the Union victory in the Battle of Atlanta, a Confederate army under the command of Gen. John Bell Hood briefly sparred with a vastly outmanned garrison during the 1864 Battle of Decatur, when Decatur was referred to as A Tough Nut To Crack.

While the city was under Confederate control, plans for the Battle of Shiloh were mapped out within the Burleson-Hinds-McEntire House. These activities make the house one of the most historic buildings in Decatur.

New Decatur, Alabama was a city that rose out of the ashes of former Decatur west of the railroad tracks. New Decatur was founded in 1887 and incorporated in 1889. However, residents of the older Decatur resented the new town, founded and occupied by people who moved down from northern states. Animosity built until New Decatur renamed their town Albany, after Albany, N.Y., in September 1916. The impetus to meld the two towns came from the need for a bridge, instead of a ferry, across the Tennessee River. The Decatur Kiwanis Club was formed with an equal number of members from each town to organize efforts to get the state to build the bridge. In 1925, the two cities merged to form one City of Decatur. There is a noticeable difference between the two sides of town. The cities developed differently at different times, and still to this day have somewhat different cultures. Eastern portions of Decatur tend to act more suburban and traditional, while western portions tend to look more metropolitan and contemporary.

The Old State Bank, on the edge of downtown, is the oldest bank building in the State of Alabama, being 173 years old. The first wave pool in the United States was built in Decatur and is still in operation at the Point Mallard Aquatic Center. The city has the largest Victorian era home district in the state of Alabama. Decatur is also home to Alabama's oldest opera house, the Cotaco Opera House, which still stands on Johnston Street.

In the past its industries included repair shops of the Louisville and Nashville Railroad, car works, engine works, bottling plants, and manufacturers of lumber, sashes and blinds, tannic acid, fertilizers, cigars, flour, cottonseed oil, and various other products. 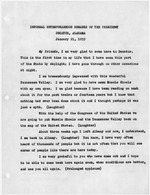 The Tennessee River has traditionally been the northern border of the city and Morgan County, while Flint Creek and the Wheeler Wildlife Refuge on the east side of the city. The city does extend to the other side of Flint Creek and the Refuge in the Indian Hills and Burningtree subdivision areas. There is also an inlet that extends one mile (2 km) into the city limits from Wheeler Lake called Dry Branch. There is also a small portion of Decatur that extends into Limestone County north along the Highway 31 corridor to the Calhoun College area and along Hwy 20 Corridor until it reaches I-65.

The northern portion of Decatur sits on top of a short hill that overlooks the Tennessee River, this creates a very steep dropoff to the river shore at Rhodes Ferry Park. This hill allows the "Steamboat Bill" Memorial Bridge to leave the mainland at grade without any major sloping required more height to cross the river while not interfering with Decatur's heavy barge traffic. This hill extends from the banks of the river about 1.5 miles (2.4 km) south to the 14th St./Magnolia St. intersection with 6th Avenue (US 31).

South past the 14th St. and 6th Ave. intersection, land continues to remain flat. South, and also west, past Alabama 67 there are a few minor mountains that sit within the city limits.

Winters are generally mild, with a January daily average temperature of 40.6 °F (4.8 °C). On average, the low temperature falls to the freezing mark or below on 59 days a year, and to or below 20 °F (−7 °C) on 9.2 days. Winters usually do not produce much snow; a large amount of snow is rare within the city limits. A small, measurable amount of snow can be experienced a few times each year. In 2011, Decatur received up to 8 inches (20 cm) of snow in a single storm. It tied for the most since 1963.+ highs. Thunderstorms are common during the summer months. The latter part of summer tends to be drier. Autumn, which spans from mid-September to early-December, tends to be similar to spring in terms of temperature and precipitation, although it begins relatively dry.

Occasionally, severe thunderstorms occur. These storms can produce damaging winds and large hail in addition to the usual hazards of lightning and very heavy rain. There is also the risk of Tornadoes. Severe thunderstorms can occur at any time of the year but are most common during the spring months. There is a secondary severe weather season during the fall months. Tropical disturbances - some of which reach the Gulf Coast as Hurricanes but lose intensity as they move inland - can occasionally bring heavy rains.

Decatur is divided into four different regions of town (Northeast, Southeast, Northwest, Southwest). Southeast and Northeast Decatur lie East of the CSX Railroad's mainline. North of Lee Street the dividing line is Bank Street which runs a block east of and parallel to the RR. Northeast & Southeast and are divided by Moulton Street. Southwest consists of the area west of the CSX Railroad and south of Moulton Street. Northwest is bordered by Moulton Street, the CSX Railroad from Moulton Street to Lee Street and then by Bank Street from Lee Street to the Tennessee River. While there are few major cultural differences between the East and the West, minute differences such as street grid patterns, zoning patterns, and architectural styles are noticeable. 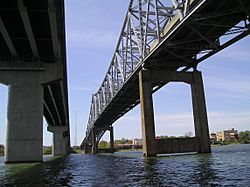 Decatur, being only a mid-sized city, has not yet seen the damaging effects of a major controlled access highway passing through the city limits.

Decatur's main thoroughfares are 6th Avenue (US 31) and The Beltline (State Route 67). 6th Avenue begins as both SR 20, US 72 Alt., and U.S. 31 split after being carried by the twin-span "Steamboat Bill" Hudson Memorial Bridge that crosses Tennessee River at the north central part of town. SR 20/Alternate U.S. 72 continues west towards The Shoals, after the Beltline begins in the vicinity of the Ascend Performance Materials LLC plant. 6th Avenue continues southward where it eventually intersects with Beltline Road. After that intersection, 6th Avenue continues southward to Birmingham as Decatur Highway.

Plans are under way to construct a controlled access beltway from Interstate 65 south of the city to Alternate U.S. 72 in Lawrence County, known as Veteran's Parkway.

In addition, there are plans to transform Alabama Highway 20/Alternate U.S. 72 into an extension of Interstate 565 into the city. Governor Bob Riley has said he will make sure that plans for the road will be put on the fast track, since more than 85 vehicle accidents occur on Highway 20's final approach into Decatur each year.

Large shipments can move from Decatur to the Atlantic Ocean via the Tennessee River to the Mississippi River and the Gulf of Mexico. The United States builds some of its space launch vehicles in Decatur (United Launch Alliance vehicles only), and ships them to both Cape Canaveral and Vandenberg Air Force Base via this water route.

All content from Kiddle encyclopedia articles (including the article images and facts) can be freely used under Attribution-ShareAlike license, unless stated otherwise. Cite this article:
Decatur, Alabama Facts for Kids. Kiddle Encyclopedia.