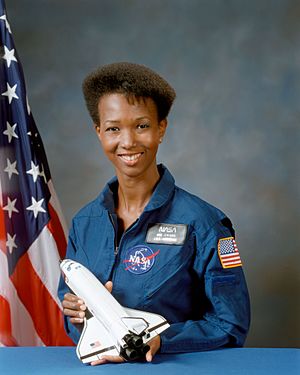 Mae Carol Jemison (born October 17, 1956) is an American engineer, physician, and former NASA astronaut. She became the first black woman to travel into space when she served as a mission specialist aboard the Space Shuttle Endeavour. Jemison joined NASA's astronaut corps in 1987 and was chosen to serve for the STS-47 mission, during which she orbited the Earth for nearly eight days from September 12–20, 1992.

Born in Alabama and raised in Chicago, Jemison graduated from Stanford University with degrees in chemical engineering as well as African and African-American studies. She then earned her medical degree from Cornell University. Jemison was a doctor for the Peace Corps in Liberia and Sierra Leone from 1983 until 1985 and worked as a general practitioner. Because she wanted to be an astronaut, she applied to NASA.

Jemison left NASA in 1993 and founded a technology research company. She later formed a non-profit educational foundation and through the foundation is the principal of the 100 Year Starship project funded by DARPA. Jemison also wrote several books for children and appeared on television several times, including in a 1993 episode of Star Trek: The Next Generation. She holds several honorary doctorates and has been inducted into the National Women's Hall of Fame and the International Space Hall of Fame.

Mae Carol Jemison was born in Decatur, Alabama, on October 17, 1956, the youngest of three children of Charlie and Dorothy Jemison. Her father was a maintenance supervisor for a charity organization, and her mother worked most of her career as an elementary school teacher of English and math at the Ludwig van Beethoven Elementary School in Chicago, Illinois. The family first lived in Woodlawn and later the Morgan Park neighborhoods. Jemison knew from a young age that she wanted to study science and someday go into space. The television show Star Trek and, in particular, African-American actress Nichelle Nichols' portrayal of Lieutenant Uhura further drew her interest to space.

Jemison enjoyed studying nature and human physiology, using her observations to learn more about science. Although her mother encouraged her curiosity and both her parents were supportive of her interest in science, she did not always see the same support from her teachers. When Jemison told a kindergarten teacher she wanted to be a scientist when she grew up, the teacher assumed she meant she wanted to be a nurse. Seeing a lack of female astronauts during the Apollo missions also frustrated Jemison. She later recalled, "everybody was thrilled about space, but I remember being really really irritated that there were no women astronauts."

Jemison began studying ballet at the age of 8 or 9 and entered high school at 12 years old, where she joined the cheerleading team and the Modern Dance Club. Jemison had a great love for dance from a young age. She learned several styles of dance, including African and Japanese, as well as ballet, jazz, and modern dance. As a child, Jemison hoped to become a professional dancer. At the age of 14, she auditioned for the leading role of Maria in West Side Story. She did not get the leading role but was selected as a background dancer.

After graduating from Chicago's Morgan Park High School in 1973, Jemison entered Stanford University at the age of 16. There were very few other African-American students in Jemison's classes and she continued to experience discrimination from her teachers. In an interview with The Des Moines Register in 2008, Jemison said that it was difficult to go to Stanford at 16 but that her youthful arrogance may have helped her.

At Stanford, Jemison served as head of the Black Students Union. She also choreographed a musical and dance production called Out of the Shadows. During her senior year in college, she struggled with the choice between going to medical school or pursuing a career as a professional dancer after graduation. She graduated from Stanford in 1977, receiving a B.S. degree in chemical engineering and B.A. degree in African and African-American studies. While Mae was at Stanford, she considered applying to NASA.

Jemison attended Cornell Medical School and during her training, traveled to Cuba to conduct a study funded by American Medical Student Association. She also traveled to Thailand, where she worked at a Cambodian refugee camp. She also worked for Flying Doctors stationed in East Africa. During her years at Cornell, Jemison continued to study dance by enrolling in classes at the Alvin Ailey American Dance Theater. After graduating with an M.D. degree in 1981, she interned at Los Angeles County-USC Medical Center in 1982, and worked as a general practitioner for Ross–Loos Medical Group.

Jemison joined the staff of the Peace Corps in 1983 and served as a medical officer until 1985 in Liberia and Sierra Leone. Jemison was responsible for supervising the Peace Corps' pharmacy, laboratory, and medical staff as well as providing medical care, writing self-care manuals, and creating and using guidelines for health and safety issues. She also worked with the Centers for Disease Control helping with research for various vaccines. 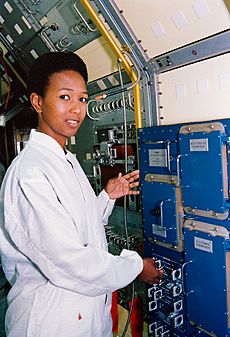 Jemison at the Kennedy Space Center in 1992

After returning home from the Peace Corps, Jemison applied to NASA's astronaut training program in October 1985. Soon after she applied, NASA had a terrible accident on January 28, 1986. Challenger was launched in Florida and it blew up soon after taking off. The astronauts were all killed. There would be no more astronauts going into space until the scientists figured out what had happened. Jemison became one of the 0.75% of people who were chosen for a special type of instruction at NASA a year after this accident had occurred. The training was physically demanding and included more studying of science. 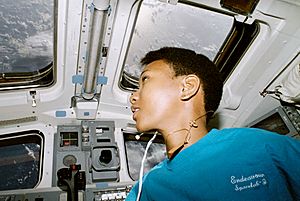 On September 28, 1989, she was chosen to join the 50th mission on the Endeavour, called STS-47. Her job was Mission Specialist 4, and she was also designated Science Mission Specialist, a new astronaut role being tested by NASA to focus on scientific experiments.

Jemison’s mission was flown from September 12-20, 1992, where she logged 190 hours, 30 minutes, 23 seconds in space, and orbited the earth 127 times. The crew was split into two shifts with Jemison assigned to the Blue Shift. Throughout the eight-day mission, she began communications on her shift with the salute, "Hailing frequencies open," a quote from Star Trek. Jemison took a poster from the Alvin Ailey American Dance Theater along with her on the flight. She also took a West African statuette and a photo of Bessie Coleman, the first African American with an international pilot license. 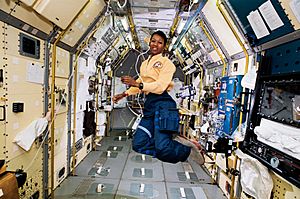 Jemison aboard the Spacelab Japan module on Endeavour

STS-47 was a joint mission between the United States and Japan that included 43 Japanese and U.S. experiments. Jemison took part in several of the experiments that were completed in space. She and Japanese astronaut Mamoru Mohri looked into possible treatments for motion sickness, anxiety and stress-related disorders. Jemison experimented with producing saline solution and was a co-investigator of two bone cell research experiments. Another experiment she participated in was to fertilize the eggs of female frogs and then see how tadpoles developed in zero gravity.

Jemison resigned from NASA in March 1993 with the intention of starting her own company. NASA training manager and author Homer Hickam, who had trained Jemison for her flight, later expressed some regret that she had departed. 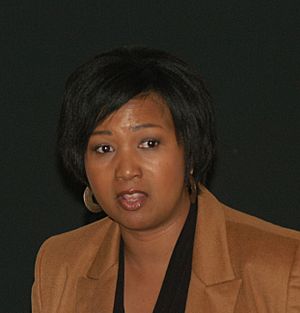 Jemison at a symposium in 2009

Jemison served on the board of directors of the World Sickle Cell Foundation from 1990 to 1992. In 1993, she founded The Jemison Group Inc., a consulting firm that studies the sociocultural impact of advancements in technology and design. Jemison also founded the Dorothy Jemison Foundation for Excellence and named the foundation in honor of her mother. The foundation sponsors programs and events including:

Jemison was a professor of environmental studies at Dartmouth College from 1995 to 2002 where she directed the Jemison Institute for Advancing Technology in Developing Countries. In 1999, she also became an Andrew D. White Professor-at-Large at Cornell University. Jemison continues to tell as many people as she can about science education and tries to get minority students interested in science. She is a member of several organizations, such as the American Medical Association, the American Chemical Society, the Association of Space Explorers and the American Association for the Advancement of Science.

In 1999, Jemison founded BioSentient Corp. She received a license to sell the relaxation technique that she and Mamoru Mohri tested on themselves during the STS-47 mission.

In 2018, she cooperated with Bayer Crop Science and National 4-H Council for the project named Science Matters, which was aimed at encouraging young children to understand and pursue agricultural sciences.

All content from Kiddle encyclopedia articles (including the article images and facts) can be freely used under Attribution-ShareAlike license, unless stated otherwise. Cite this article:
Mae Jemison Facts for Kids. Kiddle Encyclopedia.