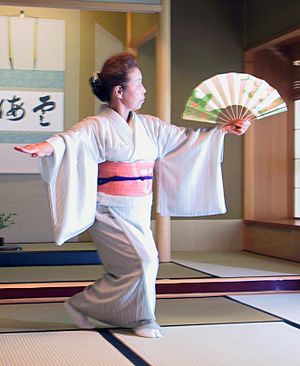 A type of the Mai style of Japanese dance is the Kyomai or Kyoto style dance. Kyomai was created in the 17th century Tokugawa cultural period. Noh drama, music and dance was heavily influenced by the elegance of the manners of the Japanese Imperial Court. Kabuki drama, and hence Odori, was a more democratic form, but still (viewed with modern eyes) quite traditional.

All content from Kiddle encyclopedia articles (including the article images and facts) can be freely used under Attribution-ShareAlike license, unless stated otherwise. Cite this article:
Japanese traditional dance Facts for Kids. Kiddle Encyclopedia.