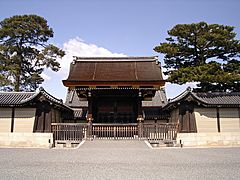 Imperial Court in Kyoto was the government of Japan from 794 AD until the Meiji Era, in which the court was moved to Tokyo. It was moved by Empress Gemma. Since Minamoto no Yoritomo started the shogunate, the true power had been in the hand of the Shoguns, who were mistaken several times for the Emperors of Japan by the Chinese government.

All content from Kiddle encyclopedia articles (including the article images and facts) can be freely used under Attribution-ShareAlike license, unless stated otherwise. Cite this article:
Imperial Court in Kyoto Facts for Kids. Kiddle Encyclopedia.