Elizabeth "Bessie" Coleman (January 26, 1892 – April 30, 1926) was the first female African American and Native American pilot ever to hold an international pilot license. She fought discrimination to follow her dream of becoming a pilot. She became a skilled barnstormer (a pilot that travels to perform stunts and give rides) and an aviation educator. 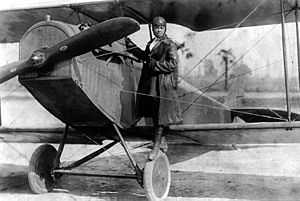 Coleman was born in Texas in 1892. Her mother was African American and her father was Native American. She was the tenth of thirteen children. Her parents were sharecroppers. When Coleman was two, her family moved to Waxahachie, Texas, where Bessie later went to school. She loved reading and excelled in math.

Coleman’s father believed that the family would be treated better if they moved to Indian Territory in Oklahoma. Unable to convince his wife to accompany him, Coleman’s father left the family when she was nine. Coleman’s mother worked as a maid. During the cotton harvest, everyone in the family worked in the fields to earn extra money. It was hot, difficult work, and during the harvest, African American children could not go to school. Bessie still managed to finish all eight grades in the local school. Coleman decided that she wanted to go to college, so she saved her money. In about four years, she had enough money to begin college. A year later, she ran out of money.

At the age of 23, Coleman boarded a train and traveled to Chicago, where she moved in with her brothers. Coleman took a class to learn to become a manicurist, and soon found a job at the White Sox Barber Shop in Chicago. There she heard stories of flying during wartime from pilots returning home from World War I. She took a second job at a chili parlor to save money so that she could become a pilot. 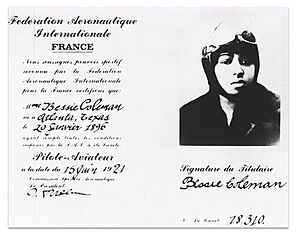 At the time, aviation (flight) schools in America were not allowing women or black people to attend. Bessie's friend Robert Abbott told her that she could travel to France to fly. She studied the French language after work at night. She got a new job managing a restaurant and saved her money. Robert Abbot and her friends helped her pay for the trip, and in 1920, Coleman sailed to France. She learned to be a pilot at the Caudron Brothers' School of Aviation. In 1921, Coleman became the first female African American pilot and the first female Native American pilot to hold an international pilot license. She earned it from the Fédération Aéronautique Internationale.

Coleman went back to the United States to work as a barnstormer, performing tricks and stunts in her airplane. Barnstormers like Coleman flew planes in loops, figure eights, and other patterns while audiences watched. Coleman performed in the United States and Europe. In the 1920s, much of the United States still practiced racial segregation. Coleman refused to perform at places that did not let African Americans watch equally. For one show in Texas, Coleman refused to perform unless the showrunners let everyone in the audience enter through the same gate instead of making one gate for white people and one for black people. She also taught flying lessons and encouraged women to learn to be pilots.

Coleman wanted to open an aviation school in the United States where black students could learn to be pilots.

In April 1926, Coleman and her mechanic, William Will, were practicing for a performance the next day. Will was piloting the plane when it flipped over and started to dive. Coleman fell out of the plane and was killed. William Wills was unable to regain control of the plane and it plummeted to the ground. Wills died upon impact and the plane exploded and burst into flames. Although the wreckage of the plane was badly burned, it was later discovered that a wrench used to service the engine had jammed the controls. 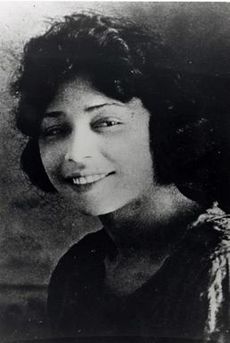 All content from Kiddle encyclopedia articles (including the article images and facts) can be freely used under Attribution-ShareAlike license, unless stated otherwise. Cite this article:
Bessie Coleman Facts for Kids. Kiddle Encyclopedia.