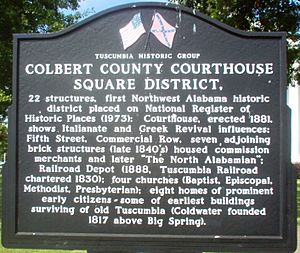 Colbert County is a county located in the northwestern part of the U.S. state of Alabama. As of the 2020 census the county's population was 57,227. The county seat is Tuscumbia. The largest city is Muscle Shoals. The county is named in honor of brothers George and Levi Colbert, Chickasaw Indian chiefs.

Colbert County was originally established on February 6, 1867 after it split from Franklin County over political issues after the American Civil War. It was abolished eight months later on November 29, 1867 by an Alabama constitutional convention and then reestablished on February 24, 1870. It is also the location of Ivy Green, the birthplace of noted author Helen Keller. Colbert County is also home of the towns Sheffield and Muscle Shoals where many popular musicians such as Aretha Franklin and the Rolling Stones recorded music. Colbert County is the home of the Key Underwood Coon Dog Memorial Graveyard established in 1937.

According to the 2010 United States Census Bureau:

All content from Kiddle encyclopedia articles (including the article images and facts) can be freely used under Attribution-ShareAlike license, unless stated otherwise. Cite this article:
Colbert County, Alabama Facts for Kids. Kiddle Encyclopedia.