Kids Encyclopedia Facts
Not to be confused with Cherokee County, Alabama.

Cherokee is a town in west Colbert County, Alabama, United States. It is part of the Florence–Muscle Shoals metropolitan area, known as "The Shoals". As of the 2010 census, the population of the town was 1,048. 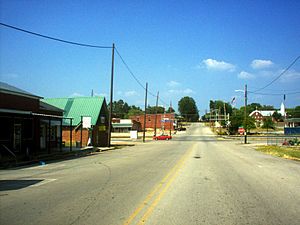 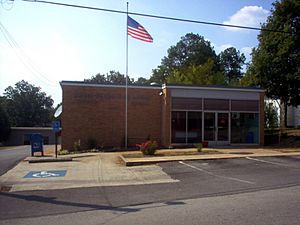 There were 452 households, out of which 25.4% had children under the age of 18 living with them, 47.6% were married couples living together, 16.8% had a female householder with no husband present, and 30.3% were non-families. 26.8% of all households were made up of individuals, and 14.6% had someone living alone who was 65 years of age or older. The average household size was 2.32 and the average family size was 2.78.

US Highway 72 is the major corridor through Cherokee. This important highway followed the railroad and was once known as the Memphis Pike. U.S. Highway 72 is still part of the Lee Highway.

The Natchez Trace Parkway passes north and west of Cherokee and is part of the National Park Service. This highway provides a vital source of tourism for the area.

The Memphis and Charleston Railroad was vital to the founding of present-day Cherokee. Once a vital passenger carrier for the area, the railroad is an important artery for the Norfolk Southern Railway system, connecting Chattanooga and Memphis. The railroad has a spur to Cherokee Nitrogen to transport ammonia and ammonium nitrate manufactured by the facility.

The Tennessee River was a critical transportation corridor for the South during the American Civil War. The river provides recreation, continues to transport goods, and is an important factor in industrial activity in the area.

The Natchez Trace Parkway is one of the most significant historical attractions in the area. The section of the Natchez Trace near Cherokee includes the Colbert Ferry site, the home of George Colbert and of Levi Colbert. The Colbert family were leaders of the Chickasaw Nation that resided in this area before they were forcibly relocated in the 19th century.

Key Underwood Coon Dog Memorial Graveyard is one of the world's most unusual cemeteries; it is dedicated to the burial of coon dogs. Each Labor Day a large celebration is held at the graveyard and is attended by many politicians seeking office.

Barton Hall is located southwest of town and was a significant plantation prior to and during the Civil War. The residence is on the National Register of Historic Places but is privately owned and not open to the public.

Buzzard Roost and Bear Creek, located west of Cherokee, provide excellent locations for fishing and water sports. One of the state's oldest wooden covered bridges once crossed Buzzard Roost but was burned in 1972.

The Barton Riverfront Industrial Park is located in the Barton community east of Cherokee near the Tennessee River. The park was constructed to attract industry to western Colbert County and has become an important economical revitalization to the area. The first company to locate in the park was SCA Tissue North America which started operation in 2004. 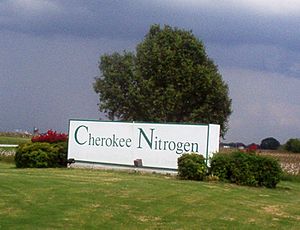 Linde sells Carbon Dioxide produced as a byproduct of the process at Cherokee Nitrogen.

On the night of November 13, 2012, Cherokee Nitrogen was the scene of a devastating explosion heard 45 miles (72 km) away that left at least one employee injured. It was felt all across the "Shoals".

SCA Tissue North America, a division of Svenska Cellulosa Aktiebolaget, was the first tenant of the Barton Riverfront Industrial Park located east of town in the Barton community. As of 2010 it has undergone several expansions and is Cherokee's largest employer.

Vulcan Materials' Cherokee Facility has been located on the east edge of town for many years. Crushed limestone from this quarry is used throughout Alabama and Mississippi.

UCM Magnesia was an industry located in the Barton area. Originally Muscle Shoals ElectroChemical Corp, it was also owned by Glasrock and later Muscle Shoals Minerals. This facility was an important supplier of high quality magnesia powder. It closed in late 2012.

In July, 2007 National Steel Car announced a decision to locate a new manufacturing facility in the industrial park, the largest new employer in Colbert County in the prior 40 years. The CEO, Gregory Aziz, was caught up in a legal case over securities fraud related to the facility and the facility was turned over to Retirement Systems of Alabama.

The facility has become an independent entity of its former parent and is now named National Alabama Corporation. Retirement Systems of Alabama is the primary shareholder.

National Alabama is designed to provide steel railcars and was expected to be the largest employer in the area. In 2010 the depressed economy was blamed for delayed full production at the facility and the company said it was looking for alternative products to produce.

As of 2011 Navistar is the primary lease holder at the National Alabama facility which is currently owned by the Retirement Systems of Alabama. Navistar fabricates parts for railcars produced by Freightcar America. Together the two companies are the largest employer in the area.

Schools in Cherokee are part of the Colbert County School System and serve rural western Colbert County. Cherokee Elementary School and Cherokee High School are located on the northern side of town along North Pike. The land for this complex, including the football field, was donated by the Harris family of Cherokee.

The population in western Colbert County has declined in recent years. Cherokee Middle School closed after the 2006 / 2007 year and was consolidated into Cherokee Elementary and Cherokee High Schools. The site was once home to one of the original Rosenwald Schools. The former middle school is now empty, while it is still owned by the Colbert County Board of Education.

All content from Kiddle encyclopedia articles (including the article images and facts) can be freely used under Attribution-ShareAlike license, unless stated otherwise. Cite this article:
Cherokee, Alabama Facts for Kids. Kiddle Encyclopedia.