Iron City is a former city and unincorporated community in Lawrence and Wayne counties, Tennessee. The population was 167 at the 2019 census.

Iron City gets its name from an iron foundry that operated in its vicinity in the late 19th century. While iron ore was mined in southwestern Lawrence County as early as the 1830s, the industry really began to thrive in 1886, when a branch railroad line to the area was completed. Iron City incorporated the following year. At its height, Iron City supported a population of about 1,000, and included two hotels and two banks.

State Route 227 passes east-to-west through Iron City, connecting it to St. Joseph across the hills to the east and State Route 13 south of Collinwood to the west. State Route 242, which intersects SR 227 in Iron City, connects the community with Westpoint and Lawrenceburg to the northeast. Poplar Street/Pruitton Road connects Iron City with Lauderdale County, Alabama, to the south, becoming County Road 61 at the state line.

According to the United States Census Bureau, the CDP has a total area of 0.9 square miles (2.4 km²), all land. 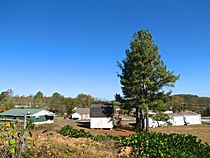 There were 151 households, out of which 31.8% had children under the age of 18 living with them, 45.7% were married couples living together, 17.9% had a female householder with no husband present, and 29.1% were non-families. 27.2% of all households were made up of individuals, and 13.2% had someone living alone who was 65 years of age or older. The average household size was 2.44 and the average family size was 2.89.

In 2008, the award-winning documentary film, Iron City Blues was released. Iron City Blues follows biker/bluesman Big Mike Griffin as he travels to Iron City in order to write a song about the town's unique history.

All content from Kiddle encyclopedia articles (including the article images and facts) can be freely used under Attribution-ShareAlike license, unless stated otherwise. Cite this article:
Iron City, Tennessee Facts for Kids. Kiddle Encyclopedia.