Ethridge began as a railroad stop known as Hudson Springs, which stood a few miles south of the present site of the town, in the 1880s. A political booster and store owner at the stop successfully petitioned the railroad to name the stop in honor of Emerson Etheridge, a prominent mid-19th century politician and post-Civil War candidate for governor. The current site of Ethridge, meanwhile, was located at the intersection of two mid-19th century cattle drovers' roads. When the railroad constructed a station at this site in the late 1890s, it was named Wayne Station. After constant confusion resulted in passengers bound for Wayne Station winding up at Ethridge, a prominent real estate broker in the area convinced the railroad to close the Ethridge stop and rename the Wayne Station stop "Ethridge."

By 1914, Ethridge's population had grown to 400, and the town thrived as a lumber transloading station. The town was home to at least four lumber mills and one lumber finishing mill. Lumber from these mills and mills further out in the countryside was hauled to Ethridge and loaded onto trains. During this period, Ethridge had five grocery stores, a meat market, two barber shops, a post office, a hotel, and a tire pump factory. The town declined, however, following the Wall Street Crash of 1929 and the gradual supplanting of rail traffic by vehicle traffic in later years. Ethridge incorporated in 1973.

According to the United States Census Bureau, the town has a total area of 1.2 square miles (3.1 km2), all land. 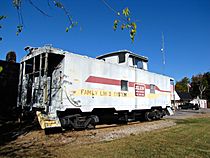 There were 210 households, out of which 33.3% had children under the age of 18 living with them, 52.4% were married couples living together, 16.7% had a female householder with no husband present, and 27.1% were non-families. 22.4% of all households were made up of individuals, and 11.9% had someone living alone who was 65 years of age or older. The average household size was 2.55 and the average family size was 2.98.

All content from Kiddle encyclopedia articles (including the article images and facts) can be freely used under Attribution-ShareAlike license, unless stated otherwise. Cite this article:
Ethridge, Tennessee Facts for Kids. Kiddle Encyclopedia.