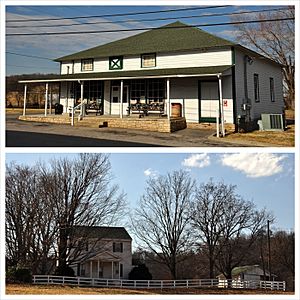 In the middle decades of the 20th century, Burwood was a rural community that served as a trading center for area farmers, while much business moved to the city of Franklin.

Burwood is the location of the John Pope House and the Huff Store, which are listed on the National Register of Historic Places.

The opening, in 2012, of the segment of SR 840 (now signed as Interstate 840) near Burwood was expected to lead to increased economic activity in the community.

All content from Kiddle encyclopedia articles (including the article images and facts) can be freely used under Attribution-ShareAlike license, unless stated otherwise. Cite this article:
Burwood, Tennessee Facts for Kids. Kiddle Encyclopedia.