Fairview is a city located in Williamson County, Tennessee. It is part of the Nashville metropolitan area. The population was 7,720 at the 2010 census, which was a 33.1% increase in population from the 2000 census. In the communities just outside Fairview, there are an additional 4,100 people, for a total of over 11,000 people living within the Fairview area.

Fairview was incorporated on July 28, 1959, under the Uniform City Manager-Commission Charter as set out in Tennessee Code Annotated. Fairview was originally known as "Jingo." Fairview city limits is located about one mile southwest from the Nashville-Davidson County line and has two interstates passing through it (I-40 & I-840). With an average elevation of 800 feet above sea level, Fairview is about 150 feet higher than Nashville and surrounding suburbs which gives Fairview the advantage of being less flood prone.

It is home to Bowie Nature Park which is one of the largest city managed parks (approx 722 acres) in the state of Tennessee. As a comparison, New York's Central Park is 843 acres. Fairview has two Elementary Schools, Fairview, and Westwood serving over 1000 students with grades K-5. Fairview Middle has an enrollment of 800 plus and is home to grades 6th-8th. FVHS serves over 1000 students, and Fairview High School was listed as one of the top 1000 High Schools in the US according to Newsweek Magazine. Fairview schools are part of the Williamson County School system (www.WCS.edu).

It has a recreation center that is part of Williamson County Parks and Recreation system. The center offers civic meeting rooms, WAVES org, exercise classes, a gym with free weights and machines and a large outdoor swimming pool. There is also a full size basketball court that is open for free play.

Fairview Ball Park has been open since 1982. In the spring, and early summer the youth of Fairview play softball, and baseball in the local recreation leagues. In the fall the park is home to an adult softball league. There are four fields located at the park, Field 1 for senior league baseball, Field 2 for tee ball, and softball, Field 3 for age groups up to 12 playing baseball, and Field 4 which is primarily a softball field.

The camp scenes in Ernest Goes to Camp were filmed at Camp Marymount, which is a 340-acre retreat/summer camp owned by the Catholic Church established in the summer of 1946.

This city is twenty-five miles from downtown Nashville, and is located along State Highway 100 in the NW section of Williamson County. 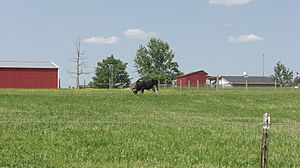 A Publix supermarket opened in Bowie Commons in 2011.

A Walmart Supercenter store opened in 2014. This is the third Super Walmart to open in Williamson County.

All content from Kiddle encyclopedia articles (including the article images and facts) can be freely used under Attribution-ShareAlike license, unless stated otherwise. Cite this article:
Fairview, Tennessee Facts for Kids. Kiddle Encyclopedia.