Carleton Place is a town in Eastern Ontario, Canada, in Lanark County, about 46 kilometres (29 mi) west of downtown Ottawa. It is located at the crossroads of Highway 15 and Highway 7, halfway between the towns of Perth, Almonte, Smiths Falls, and the nation's capital, Ottawa. The Mississippi River, a tributary of the Ottawa River flows through the town. Mississippi Lake is just upstream by boat, as well as by car. 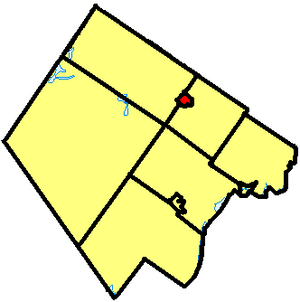 The town is situated on the edge of a large limestone plain, just south of the edge of the Canadian Shield in the deciduous forest ecoregion of North America. Carleton Place was first settled when British authorities prompted immigration to Lanark County in the early 19th century. The Morphy and Moore families were among the first to arrive. Edmond Morphy chose the site in 1819 when he realized there was potential in the area waterfall. He built a mill there and was the first of many such textile and lumber industries to reside in the area. The settlement was then known as Morphy's Falls. In 1829, the area was renamed Carleton Place, after a street in Glasgow, Scotland, when a post office was constructed. It became a village in 1870, and a town in 1890. The community's economic growth was enabled by the construction of the Brockville and Ottawa Railway later in the century. The town was also renowned for its access to Mississippi Lake, and had steamship service to Innisville on the west end of Mississippi Lake between the 1860s and 1920s. The river led to the development of the Ottawa Valley Canoe Association in 1893, which still exists today as the Carleton Place Canoe Club. The town received further recognition when a World War One fighter pilot, and town resident, Captain Arthur Roy Brown, made history by shooting down the Red Baron.

Carleton Place is an active participant in the Sister Cities program and has a relationships with the following municipalities:

All content from Kiddle encyclopedia articles (including the article images and facts) can be freely used under Attribution-ShareAlike license, unless stated otherwise. Cite this article:
Carleton Place Facts for Kids. Kiddle Encyclopedia.