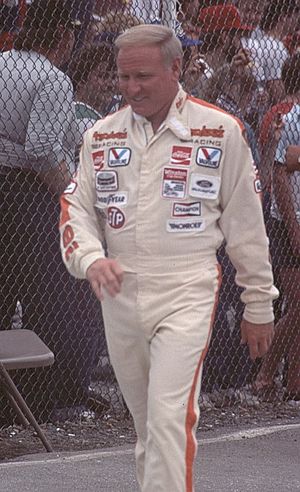 Cale at a NASCAR event.

William "Caleb" Cale Yarborough (born March 27, 1939 in Timmonsville, South Carolina) is a former NASCAR Winston Cup Series driver and was one of the series personalities.

His legend began at Darlington

As a young kid, Yaroborough attended the Southern 500 as a spectator without a ticket, by 1958, he was able to be competing in the Grand National Circuit, In 1965, He was involved in a wreck by Sam McQuagg, Yaroborough's car sailed over the guardrail after tangling with McQuagg's car, Yaroborough tried to make a pass with McQuagg, but their tenders touched Yaroborugh's car went airborne, The car came to rest against a telephone pole outside the track, Yaroborough, who was uninjured, said "I knew I was in trouble when I saw the grass, because I knew there ain't no grass on the racetrack",

On February 25, 1968, he won his first big time race as he beat LeeRoy Yarbrough by less than a second to win the 1968 Daytona 500, Yarborough would win five more races incuding the Southern 500 by four car lengths above David Pearson.

Two episodes of the TV show The Dukes of Hazzard, was featured Cale playing himself, "Cale comes to the Hazzard" in 1984 and "Cale meets the Hazzard in 1979".

All content from Kiddle encyclopedia articles (including the article images and facts) can be freely used under Attribution-ShareAlike license, unless stated otherwise. Cite this article:
Cale Yarborough Facts for Kids. Kiddle Encyclopedia.