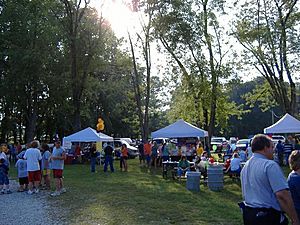 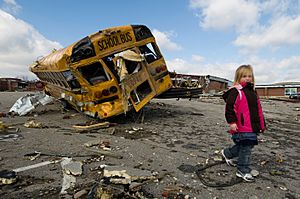 A young girl walks the parking lot of her elementary school in Henryville after the March 2012 tornado.

Henryville is a census-designated place (CDP) in Monroe Township, Clark County, in the U.S. state of Indiana. The population was 1,905 at the 2010 census.

Henryville is the birthplace of "Colonel" Harland Sanders, founder of Kentucky Fried Chicken.

At approximately 3:15 p.m. (EST) on March 2, 2012, an EF-4 tornado caused extensive damage to Henryville, killing at least three people. It was on the ground for more than 50 miles. The storm destroyed Henryville Elementary School and Henryville Jr/Sr High School.

The climate in this area is characterized by hot, humid summers and generally mild to cool winters. According to the Köppen Climate Classification system, Henryville has a humid subtropical climate, abbreviated "Cfa" on climate maps.

There were 583 households, out of which 38.1% had children under the age of 18 living with them, 58.8% were married couples living together, 11.0% had a female householder with no husband present, and 25.4% were non-families. 21.6% of all households were made up of individuals, and 7.9% had someone living alone who was 65 years of age or older. The average household size was 2.65 and the average family size was 3.07.

Henryville has an elementary, and junior/senior high school.

Henryville has a public library, a branch of the Charlestown-Clark County Public Library.

Interstate 65 passes north-south through the west side of Henryville and roughly parallels the older U.S. Route 31. Indiana State Road 160 intersects the previous two roads in Henryville.

All content from Kiddle encyclopedia articles (including the article images and facts) can be freely used under Attribution-ShareAlike license, unless stated otherwise. Cite this article:
Henryville, Indiana Facts for Kids. Kiddle Encyclopedia.