Sanders held a number of jobs in his early life, such as steam engine stoker, insurance salesman and filling station operator. He began selling fried chicken from his roadside restaurant in North Corbin, Kentucky, during the Great Depression. Sanders recognized the potential of the restaurant franchising concept, and the first KFC franchise opened in Utah in 1952. The company's rapid expansion across the United States and overseas was overwhelming for Sanders and, in 1964, he sold the company to a group of investors led by John Y. Brown, Jr. and Jack C. Massey for $2 million ($13.7 million today).

In 1906, with his mother's approval, Sanders left the area to live with his uncle in New Albany, Indiana. His uncle worked for the streetcar company, and secured Sanders a job as a conductor.

Sanders falsified his date of birth and enlisted in the United States Army in October 1906, completing his service commitment as a teamster in Cuba. He was honorably discharged in February 1907 and moved to Sheffield, Alabama.

In 1909, Sanders found laboring work with the Norfolk and Western Railway. While working on the railroad, he met Josephine King of Jasper, Alabama, and they were married shortly afterwards. They would go on to have a son, Harland, Jr., who died in 1932 and two daughters, Margaret Sanders and Mildred Sanders Ruggles.

He then found work as a fireman on the Illinois Central Railroad, and he and his family moved to Jackson, Tennessee. By night, Sanders studied law by correspondence through the La Salle Extension University. In 1920, Sanders established a ferry boat company, which operated a boat on the Ohio River between Jeffersonville and Louisville.

Sanders moved to Winchester, Kentucky, to work as a salesman for the Michelin Tire Company. He lost his job in 1924 when Michelin closed their New Jersey manufacturing plant. In 1924, by chance, he met the general manager of Standard Oil of Kentucky, who asked him to run a service station in Nicholasville. In 1930, the station closed as a result of the Great Depression. 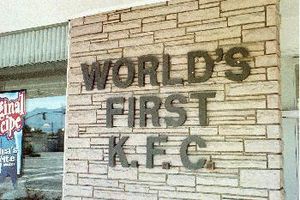 In 1952, Sanders franchised his secret recipe "Kentucky Fried Chicken" for the first time, to Pete Harman of South Salt Lake, Utah, the operator of one of that city's largest restaurants. In the first year of selling the product, restaurant sales more than tripled, with 75% of the increase coming from sales of fried chicken.

Sanders believed that his North Corbin restaurant would remain successful indefinitely, but at age 65 sold it after the new Interstate 75 reduced customer traffic. Sanders decided to begin to franchise his chicken concept in earnest, and traveled the US looking for suitable restaurants, he opened a new restaurant and company headquarters in Shelbyville in 1959. Often sleeping in the back of his car, Sanders visited restaurants, offered to cook his chicken, and if workers liked it negotiated franchise rights.

Although such visits required much time, eventually potential franchisees began visiting Sanders instead. The franchise approach became highly successful; KFC was one of the first fast food chains to expand internationally, opening outlets in Canada and later in England, Mexico and Jamaica by the mid-1960s. Sanders obtained a patent protecting his method of pressure frying chicken in 1962. Sanders trademarked the phrase "It's Finger Lickin' Good" in 1963.

The company's rapid expansion to more than 600 locations became overwhelming for the aging Sanders. In 1964, then 73 years old, he sold the Kentucky Fried Chicken corporation for $2 million. In 1965, Sanders moved to Mississauga, Ontario to oversee his Canadian franchises and continued to collect franchise and appearance fees both in Canada and in the U.S.

Sanders remained the company's symbol after selling it, traveling 200,000 miles a year on the company's behalf and filming many TV commercials and appearances. He retained much influence over executives and franchisees, who respected his culinary expertise. 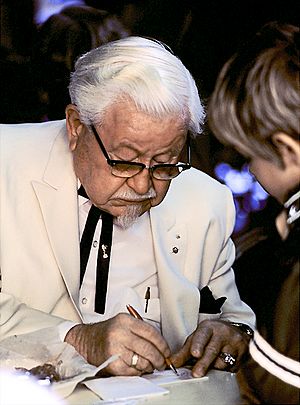 After being recommissioned as a Kentucky colonel in 1950 by Governor Lawrence Wetherby, Sanders began to dress the part, growing a goatee and wearing a black frock coat (later switching to a white suit), a string tie, and referring to himself as "Colonel."

He never wore anything else in public during the last 20 years of his life, using a heavy wool suit in the winter and a light cotton suit in the summer. He bleached his mustache and goatee to match his white hair. 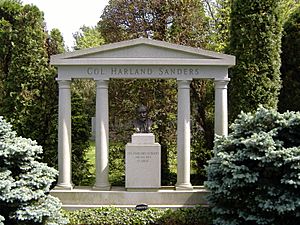 Sanders was diagnosed with acute leukemia in June 1980. He died at Jewish Hospital in Louisville, Kentucky of pneumonia on December 16, 1980 at the age of 90. Sanders had remained active until the month before his death, appearing in his white suit to crowds. His body lay in state in the rotunda of the Kentucky State Capitol in Frankfort after a funeral service at the Southern Baptist Theological Seminary Chapel, which was attended by more than 1,000 people. Sanders was buried in his characteristic white suit and black western string tie in Cave Hill Cemetery in Louisville.

By the time of Sanders' death, there were an estimated 6,000 KFC outlets in 48 countries worldwide, with $2 billion ($5.2 billion today) of sales annually.

As a symbol of the KFC brand 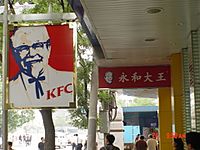 In April 2017, actor Rob Lowe was announced as the newest actor in the role of Colonel Sanders. Lowe stated that as a child, he actually got to meet Harland Sanders.

The Japanese Nippon Professional Baseball league has developed an urban legend of the "Curse of the Colonel". A statue of Colonel Sanders was thrown into a river and lost during a 1985 fan celebration, and (according to the legend) the "curse" has caused Japan's Hanshin Tigers to perform poorly since the incident.

Characters based on Colonel Sanders have appeared in popular fiction. Within the DC Comics multiverse, alternate versions of the Colonel appear in the promotional title KFC: The Colonel Corps. In the novel Kafka on the Shore by Haruki Murakami, Colonel Sanders appears when an "abstract concept" takes on the appearance of "a famous capitalist icon."

One of Colonel Sanders' white suits and black clip-on bow-ties were sold at auction for $21,510 by Heritage Auctions on June 22, 2013. The suit was purchased by Kentucky Fried Chicken of Japan president Maseo "Charlie" Watanabe. Watanabe put on the famous suit after placing the winning bid at the auction event in Dallas, Texas.

In 2011, a manuscript of a book on cooking that Sanders apparently wrote in the mid-1960's was found in KFC archives. It includes some cooking recipes from Sanders as well as anecdotes and life lessons. KFC said it was planning to try some of the recipes and to publish the 200-page manuscript online.

All content from Kiddle encyclopedia articles (including the article images and facts) can be freely used under Attribution-ShareAlike license, unless stated otherwise. Cite this article:
Colonel Sanders Facts for Kids. Kiddle Encyclopedia.