Winchester is a home rule-class city in and the county seat of Clark County, Kentucky, United States. The population was 18,368 at the 2010 census. It is part of the Lexington-Fayette, KY Metropolitan Statistical Area.

It was named after Winchester, Virginia. 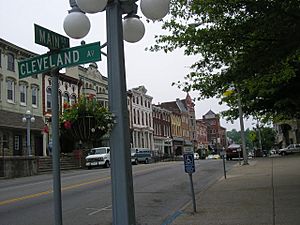 Winchester is located northwest of the center of Clark County, 18 miles (29 km) east of Lexington and 15 miles (24 km) west of Mt. Sterling. Kentucky Route 1958 (Bypass Road) is an outer loop around the town. Kentucky Route 627 (Boonesborough Road) leads towards Richmond, 21 miles (34 km) to the south and Paris to the north. U.S. Route 60 (Winchester-Lexington Road/Lexington Avenue) runs through downtown Winchester. Interstate 64 passes through the northern part of the city, with access from exits 94 and 96. The Mountain Parkway turns off I-64 just northeast of Winchester and leads 75 miles (121 km) east to Salyersville.

The climate in this area is characterized by hot, humid summers and generally mild to cool winters. According to the Köppen Climate Classification system, Winchester has a humid subtropical climate, abbreviated "Cfa" on climate maps. 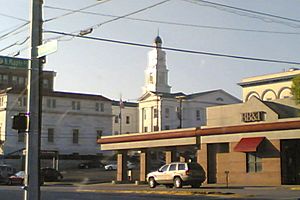 There were 6,907 households out of which 31.4% had children under the age of 18 living with them, 47.0% were married couples living together, 16.4% had a female householder with no husband present, and 33.1% were non-families. 28.5% of all households were made up of individuals and 12.6% had someone living alone who was 65 years of age or older. The average household size was 2.39 and the average family size was 2.93.

All content from Kiddle encyclopedia articles (including the article images and facts) can be freely used under Attribution-ShareAlike license, unless stated otherwise. Cite this article:
Winchester, Kentucky Facts for Kids. Kiddle Encyclopedia.