Fried chicken consists of pieces of chicken that have been either battered or floured and then pan fried, pressure fried or deep fried. The breading adds a crisper crust to chickens' exterior. The chicken is cut at the joints with the bones and skin being left intact. Some fast food restaurant chains serve fried chicken, most notably Kentucky Fried Chicken and Church's Chicken. 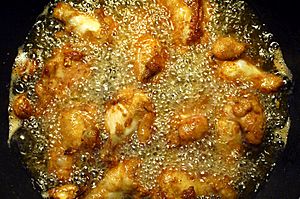 Generally, chickens are not fried whole; instead, the chicken is divided into its constituent pieces. The two white meat sections are the breast and the wing from the front of the chicken, while the dark meat sections are the thigh and leg or "drumstick", are from the rear of the chicken. These pieces are usually subdivided into the wings, the breasts (the wishbone is often cut out first in home cooking), the legs, and the thighs. The ribs are sometimes left on the breast, but commercially they and the back are usually discarded.

To prepare the chicken pieces for frying, they may be coated in a batter of flour and liquid (and seasonings) mixed together. The batter can contain ingredients like eggs, milk, and leavening. Alternatively, they may be dredged in flour or a similar dry substance, to coat the meat and to develop a crust. Seasonings such as salt, pepper, cayenne pepper, paprika, garlic powder, onion powder, or ranch dressing mix can be mixed in with the flour. Either process may be preceded by marination or by dipping in milk or buttermilk. As the pieces of chicken cook, some of the moisture that exudes from the chicken is absorbed by the coating of flour and browns along with the flour, creating a flavorful crust. According to Nathan Bailey's 1736 cookbook, Dictionarium Domesticum, for example, the chicken can be covered in a marinade that consists of the juice of two large fresh lemons, malt vinegar, bay leaves, salt, pepper, ground cloves, and green onions; it then must be settled in the marinade for three hours before being dipped in the batter that consists of all-purpose flour, white wine, three egg yolks and salt, and then slowly submerged in a deep pot of either oil, lard, or clarified butter over an open fire. It can then be topped with fresh, dried parsley dipped in the same frying oil.

Traditionally, lard is used to fry the chicken, but corn oil, peanut oil, canola oil, or vegetable oil are also frequently used (although clarified butter may be used as well like in colonial times). The flavor of olive oil is generally considered too strong to be used for traditional fried chicken, and its low smoke point makes it unsuitable for use. There are three main techniques for frying chickens: pan frying, deep frying and broasting. 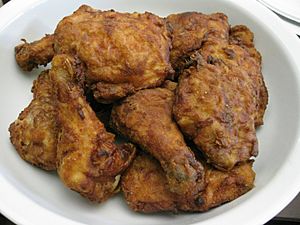 Pan frying (or shallow frying) requires a frying pan of sturdy construction and a source of fat that does not fully immerse the chicken. The chicken pieces are prepared as above, then fried. Generally the fat is heated to a temperature hot enough to seal (without browning, at this point) the outside of the chicken pieces. Once the pieces have been added to the hot fat and sealed, the temperature is reduced. There is debate as to how often to turn the chicken pieces, with one camp arguing for often turning and even browning, and the other camp pushing for letting the pieces render skin side down and only turning when absolutely necessary. Once the chicken pieces are close to being done the temperature is raised and the pieces are browned to the desired color (some cooks add small amounts of butter at this point to enhance browning). The moisture from the chicken that sticks and browns on the bottom of the pan become the fonds required to make gravy.

Deep frying requires a deep fryer or other device in which the chicken pieces can be completely submerged in hot fat. The process of deep frying is basically placing food fully in oil and then cooking it at a very high temperature. The pieces are prepared as described above. The fat is heated in the deep fryer to the desired temperature. The pieces are added to the fat and a constant temperature is maintained throughout the cooking process.

The derivative phrases "country fried" and "chicken fried" often refer to other foods prepared in the manner of fried chicken. Usually, this means a boneless, tenderized piece of meat that has been floured or battered and cooked in any of the methods described above or simply chicken which is cooked outdoors. Chicken fried steak and "country fried" boneless chicken breast are two common examples. 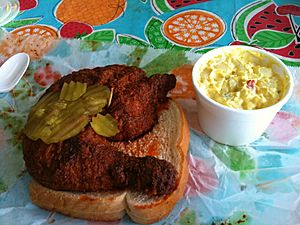 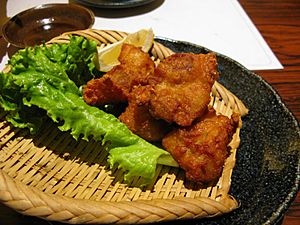 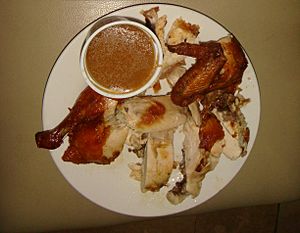 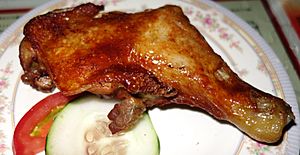 Throughout the world, different seasoning and spices are used to augment the flavor of fried chicken. Because of the versatility of fried chicken, it is not uncommon to flavor the chicken's crisp exterior with a variety of spices ranging from spicy to savory. Depending on regional market ubiquity, local spice variations may be labeled as distinct from traditional Southern U.S. flavors, or may appear on menus without notation. With access to chickens suitable for frying broadening on a global scale with the advent of industrialized poultry farming, many localities have added their own mark on fried chicken, tweaking recipes to suit local preferences. 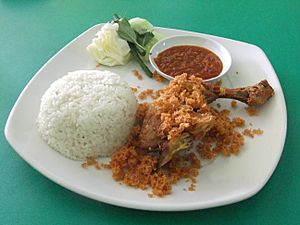 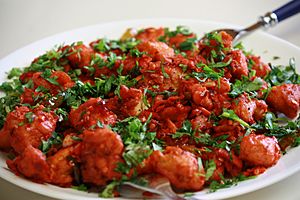 All content from Kiddle encyclopedia articles (including the article images and facts) can be freely used under Attribution-ShareAlike license, unless stated otherwise. Cite this article:
Fried chicken Facts for Kids. Kiddle Encyclopedia.