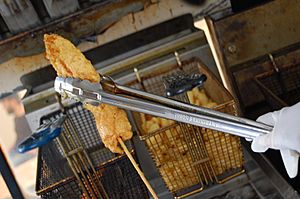 Hot chicken strip on a stick

Hot chicken, also known as Nashville hot chicken, is a type of fried chicken. It is a specialty of Nashville, Tennessee. In typical preparation, it is portions of breast, thigh, leg or wing. The pieces are marinated in a water-based blend of seasoning, floured. They are prepared with a sauce with cayenne pepper.

Hot chicken is often served with white bread and pickles. There are many restaurants in Nashville that serve their own versions of the dish. Its popularity has spread outside the Southern United States.

In 2016, KFC began serving hot chicken in its restaurants across the United States.

All content from Kiddle encyclopedia articles (including the article images and facts) can be freely used under Attribution-ShareAlike license, unless stated otherwise. Cite this article:
Hot chicken Facts for Kids. Kiddle Encyclopedia.