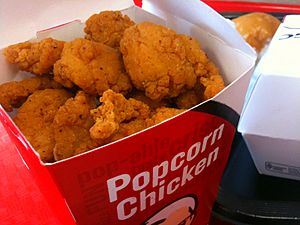 Popcorn chicken is a dish consisting of small, bite-sized pieces of chicken that have been breaded and fried. The idea was originally developed by KFC but has since spread. It is widely available in fast food restaurants and grocery stores in the U.S.

Popcorn chicken was invented by food technologist Gene Gagliardi. It was test-marketed in the United States from March 1992, and had been launched nationwide by September of that year. It has been periodically available in KFC outlets. It was re-introduced in the US in 1998, and again in 2001. It was later re-introduced once again in 2015, under the name "KFC Popcorn Nuggets".

The product is targeted at teenagers and young adults.

All content from Kiddle encyclopedia articles (including the article images and facts) can be freely used under Attribution-ShareAlike license, unless stated otherwise. Cite this article:
Popcorn chicken Facts for Kids. Kiddle Encyclopedia.