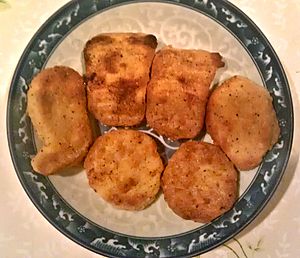 A chicken nugget is a chicken product made from chicken meat which is breaded or battered, then deep-fried or baked. Fast food restaurants typically fry their nuggets in vegetable oil.

The chicken nugget was invented in the 1950s by Robert C. Baker, a food science professor at Cornell University, and published as unpatented academic work. Dr. Baker's innovations made it possible to form chicken nuggets in any shape. The McDonald's version of Chicken Nuggets are known as Chicken McNuggets. Their recipe was created on commission from McDonald's by Tyson Foods in 1979 and the product was sold beginning in 1980.

Chicken nuggets are generally regarded as a fatty, unhealthy food. Nutritionists agree that the dish is one of the prime reasons that obesity and health problems are such a big problem in countries like the United States, especially in children.

All content from Kiddle encyclopedia articles (including the article images and facts) can be freely used under Attribution-ShareAlike license, unless stated otherwise. Cite this article:
Chicken nuggets Facts for Kids. Kiddle Encyclopedia.