Barberton is a city in Summit County, Ohio, United States. The population was 26,550 at the 2010 census. It is a commuter town adjacent to Akron and is part of the latter's Metropolitan Statistical Area.

Barberton was founded in 1891 by industrialist Ohio Columbus Barber, who planned the town according to his vision of industry, progress and community. In 1894 he moved the manufacturing operations of the Diamond Match Company, which he formed from a merger of 11 companies, from Akron to Barberton. He soon was producing 250 million matches a day. In the valley running parallel to the Tuscarawas River and the Ohio & Erie Canal, he oversaw the construction of factories, residential neighborhoods and a compact commercial downtown. In the center of the new city was Lake Anna, named after Barber's only daughter, Anna Laura Barber.

Barberton became known as the "Magic City" because of its rapid population growth during its formative industrial years, at a time of waves of immigration from eastern and southern Europe. In 1891, when Barberton was incorporated, the scattered farms that had originally characterized the landscape were transformed into a fledgling city of 1,800. When an Akron Beacon Journal reporter revisited Barberton in 1893, he noted that since 1891, it had grown so quickly that it appeared to have grown by magic (hence its nickname). Many new immigrants were attracted to its industrial jobs, which provided a path to assimilation. 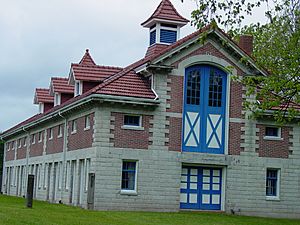 In 1908 on a high hill on the east side of town, Barber began construction of an experimental farm and estate, which he called Anna Dean Farm. It included his 52-room, French Renaissance Revival-style mansion, completed in 1909, and lush gardens, dozens of barns and other structures in the same style, and greenhouses. Barber built 35 structures for the Anna Dean Farm, all in the French Renaissance Revival style. The farm covered 3500 acres. Believing farming could be as efficient as industry, Barber intended the farm to be the basis of an agricultural college, but he did not complete its financing before his death. He willed the farm to Case Western University. It later sold much of the property.

Today, five of the eight primary buildings and associated property of the farm complex are owned by the Barberton Historical Society. These buildings are constructed of red brick edged in white concrete block, with royal blue trim and red tile roofing. The most significant of the remaining buildings is Barn No. 1, the former Dairy Barn, restored in 1985 and now the world headquarters of the Yoder Brothers Corporation, horticulturists. The building has castle tower-like silos, visible from much of the east side of the city. The other barns have been structurally stabilized and at least partially restored. All but one may be renovated for other economic uses. The Creamery has been restored as a residence for the same family since 1943, and served as the birthplace for the Apostolic Church of Barberton founded in 1950. 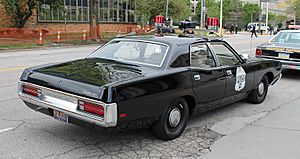 After sale by Case Western University following World War II, most of the 40-acre Barber estate was broken up and redeveloped for suburban residential housing. The mansion was demolished in 1965.

Barberton's sources of news include daily newspapers from major cities, such as the Akron Beacon Journal and the Cleveland Plain Dealer, as well as the local weekly newspaper, the Barberton Herald.

During the 1980s Barberton suffered a precipitous economic decline due to restructuring in heavy industry and job losses, similar to much of the rest of the industrial American Midwest. It was in many ways representative of a typical Rust Belt city. During this period, the city lost a large part of its economic base as factories shuttered and stores went vacant. The Magic City: Unemployment in a Working-Class Community (Cornell University Press, 1989) documents the consequences of the migration of major industry from the region and the responses of residents to such dramatic changes.

In 1985, key business stakeholders and government leaders created the Barberton Community Development Corporation (BCDC). The BCDC today functions through a Board of Directors of 20 stakeholders and city members, including the Mayor of Barberton. Led by Tom Anders as Chairman, and Executive Director Larry Lallo, it has facilitated the creation of over 2000 jobs, and in excess of $100 million in business expansion projects. They have stimulated the creation of three mini-industrial parks, and 25 new construction projects. The BCDC was originally funded through federal funds, and donations of real estate by the Babcock & Wilcox Company. With the creation of the Barberton Community Foundation in the late 1990s, the BCDC entered into a new level. It invested a portion of the Foundation's assets in prime credit business expansion projects.

The Barberton Community Foundation facilitated the construction of a new Barberton High School, located on reclaimed swampland in the northwest section of the city.

Lake Anna, a glacial kettle lake, is a 1-acre (4,000 m2) natural spring lake that lies in the center of the original village of Barberton. It is the center of a 21-acre (85,000 m2) park named after it. Lake Anna is named for O. C. Barber's daughter Anna Laura Barber.

All content from Kiddle encyclopedia articles (including the article images and facts) can be freely used under Attribution-ShareAlike license, unless stated otherwise. Cite this article:
Barberton, Ohio Facts for Kids. Kiddle Encyclopedia.