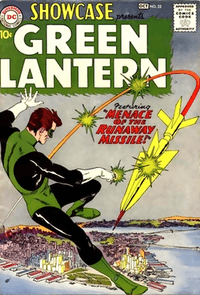 Green Lantern is the name of several fictional superheroes that appear in comic books published by DC Comics.

The first was Alan Scott and was created by writer Bill Finger and artist Martin Nodell in All-American Comics #16 in July 1940.

The most famous is Hal Jordan and was created by John Broome and Gil Kane in Showcase #22 in October 1959.

Alan Scott was the Golden Age Green Lantern and his ring was powered by magic.

All of the Green Lanterns since then have worn rings that were not magic, but advanced technology. The Guardians of the Universe created the power rings and granted them to worthy candidates throughout the galaxy. These individuals make up the Green Lantern Corps, an intergalactic police force.

Alan Scott was a young engineer when he found a metal lantern that glowed with a magical green flame. The flame told Alan how to build a ring. Alan used the power of the ring to fight crime. Alan was a founding member of the Justice Society of America.

Alan Scott's power ring had to be recharged every 24 hours and did not work on wood.

Hal Jordan's hometown Coast City was destroyed in the early 1990s and he went insane. Jordan destroyed the Green Lantern Corps and renamed himself Parallax. Jordan later died, sacrificing himself to reignite a dying Sun only to return from the grave as the Spectre, the divine Spirit of God's Vengeance.

Hal Jordan was later brought back to life and he once again became a Green Lantern. He also made an oath to recharge the power ring:
"In brightest day, in blackest night
No evil shall escape my sight,
Let those who worship evil's might,
Beware my power...Green lantern's light!"

Guy Gardner was the second choice of Abin Sur and the backup to Hal Jordan.

John Stewart, an architect, was chosen by the Guardians to replace Guy Gardner as the backup Green Lantern for Hal Jordan.

Kyle Rayner, a freelance artist, was given the last power ring, and restored the Guardians and Corps after Jordan destroyed them as Parallax. Later Kyle became Ion, the manifestation of willpower, for a short time.

All content from Kiddle encyclopedia articles (including the article images and facts) can be freely used under Attribution-ShareAlike license, unless stated otherwise. Cite this article:
Green Lantern Facts for Kids. Kiddle Encyclopedia.