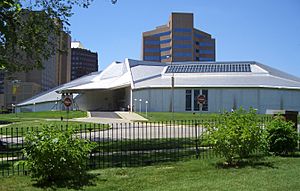 The Kemper Museum of Contemporary Art, designed by Gunnar Birkerts

Birkerts, for most of his career, was based in the metropolitan area of Detroit, Michigan. Some of his designs include the Corning Museum of Glass and the Corning Fire Station in Corning, New York, Marquette Plaza in Minneapolis, Minnesota, the Kemper Museum of Contemporary Art in Kansas City, Missouri, and the U.S. Embassy in Caracas, Venezuela.

In 2014, he designed the National Library of Latvia in Riga, Latvia, aka the Castle of Light, whose architectural form references and draws inspiration from Latvian folklore.

Birkerts died at the age of 92 on August 15, 2017 at his home in Needham, Massachusetts of congestive heart failure.

All content from Kiddle encyclopedia articles (including the article images and facts) can be freely used under Attribution-ShareAlike license, unless stated otherwise. Cite this article:
Gunnar Birkerts Facts for Kids. Kiddle Encyclopedia.