Designed by Gunnar Birkerts, it was home to the Federal Reserve Bank of Minneapolis from 1973 to 1997 (hence, many people refer to it as "the old Federal Reserve building"). Designed much like a suspension bridge, most of the original floors are supported by two sets of catenary cables. Underground chambers were used for vault space, and an external elevator shaft was attached on the east face of the building to connect a ground-floor lobby with the rest of the building. There was originally a gap between the lobby and the rest of the above ground structure to emphasize the construction method. 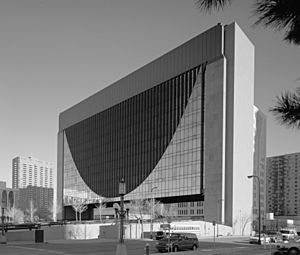 While the building's design has been highly praised as an engineering achievement, it was plagued with design defects that led to leaky windows and other problems. In addition, asbestos had been heavily used in the building's construction. The Minneapolis Federal Reserve decided to build a new complex a few blocks away rather than renovate the structure, and it passed to private hands. The building was remodeled in 2002 for about US$65 million, a process which included adding office space to the east side and into the aboveground gap, while also converting a concrete plaza into a grassy park. A skyway connection was added to the ING ReliaStar 111 Building.

Early designs for the building included sketches for an addition on top that included an inverted catenary, resulting in a shape resembling an oval. The building is credited with influencing the decision to add an observation bridge with a catenary arch above the dramatic opening in Saudi Arabia's Kingdom Centre. Local design company Ellerbe Becket contributed to the work for that structure.

Major tenants after the move have included telecommunications companies that made use of the vault space. The Minneapolis Public Library's central location had also been temporarily located there while waiting for the 2006 completion of a new building a block away.

All content from Kiddle encyclopedia articles (including the article images and facts) can be freely used under Attribution-ShareAlike license, unless stated otherwise. Cite this article:
Marquette Plaza Facts for Kids. Kiddle Encyclopedia.