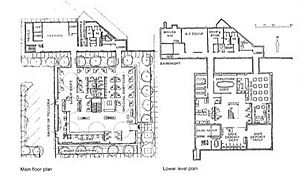 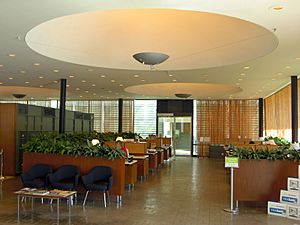 The Irwin Conference Center (formerly known as Irwin Union Bank) was designed by Eero Saarinen and built in 1954 in Columbus, Indiana. It is currently owned and operated by Cummins, whose world headquarters is located across Jackson Street in the Cummins Corporate Office Building. In recogniztion of its unique and beautiful design, the resource was designated a National Historic Landmark by the National Park Service in 2001.

The building consists of a one-story bank structure and adjacent three-story office annex. A portion of the office annex was built along with the banking hall in 1954. The remaining, much larger portion, designed by Kevin Roche, John Dinkeloo and Associates, was built in 1973.

Irwin Miller became president of the Irwin Union Trust Company after his father's death in 1947. Three years later, he commissioned Eero Saarinen to design a new building for the bank. The building was designed to distance the Irwin Union Bank from traditional banking architecture, which mostly echoed imposing, neoclassical style buildings of brick or stone. Miller wanted the building to symbolize the bank's progressive mission, which included offering some of the first credit cards and earliest drive-through banking. Instead of having tellers behind iron bars and removed from their customers, Saarinen worked to develop a building that would welcome customers rather than intimidate them.

I fly from Dallas to Columbus, Indiana where before the war we built a church. Perhaps you remember it. The same family, only a younger generation, wants to build a bank. We now have what I think is a very good scheme. I don't think it would be just the way it is unless you and I had been to Cordoba and seen the mosque. It is a wonderful opportunity to do something really good and different because the client is simply out of this world. It is going to be a bank without any pompousness, absolutely no intention to impress. All it is a very low glass enclosed marketplace-like little building in the middle of the town.

– Eero Saarinen, to his friend Astrid Sampe, with whom he had just spent a few days in Spain

The structure has changed ownership twice since 2008 and is now operated by the corporate hospitality division of Cummins.

The glass building may look simple, but like all Saarinen's projects, every aspect of the space was designed after extensive research of its use. The ceiling was designed at 11 ft 6 in (3.51 m) in height so the space would not feel oppressive. A freestanding structure for files occupies the center in the building, so that the office floor would be open and uncluttered. The colorful counters where tellers worked were equipped with removable plastic hoods when traffic demanded additional counters. A small elevator and spiral staircase gave tellers secure access to the cash vault below and two steel and glass vestibules connect the glass pavilion to the three-story office annex, where customers could transact business privately.

The grid of large domes on the roof of the bank was a source of amusement for the townspeople, who jokingly called the bank a "brassiere factory". Nevertheless, they loved the building and customers increased fourfold.

The bank building only occupied one-third of the site, the rear portion housed a drive-through window and large parking lot surrounded and intersected with trees. Landscape architect Dan Kiley chose specific types of trees and foliage in order to integrate the bank with its neighboring buildings and help shade the inside of the bank. He used littleleaf linden trees as the basis of the space, with euonymus as ground cover and seasonal spring bulbs, begonias, geraniums, and chrysanthemums as accents.

The goal was to create a green space in the middle of downtown Columbus and provide the city with some breathing room. Since the bank building is lower than the surrounding buildings, its landscape feels more park-like. As the number of automobiles on the streets grew in the early 1950s, spaces like this helped relieve the congestion of busy downtown areas.

On September 18, 2009, the Indiana Department of Financial Institutions closed the Irwin Union Bank and Trust Company and named the Federal Deposit Insurance Corporation (FDIC) as receiver. First Financial Bank of Hamilton, Ohio, purchased all deposits and virtually all assets of Irwin Union Bank and participated in a loss-share transaction jointly with the FDIC. The FDIC estimated that the cost to the Deposit Insurance Fund (DIF) for both institutions was $850 million.

All content from Kiddle encyclopedia articles (including the article images and facts) can be freely used under Attribution-ShareAlike license, unless stated otherwise. Cite this article:
Irwin Conference Center Facts for Kids. Kiddle Encyclopedia.