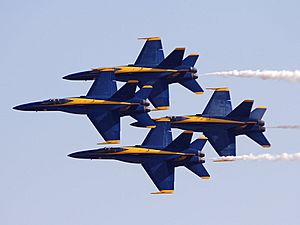 The Blue Angels flying in formation.

The Blue Angels are a group of special pilots who work for the US Navy. They fly F/A-18 fighter jet airplanes that are painted to look different from regular Navy planes. They are very famous. Almost every American has heard of them. The pilots of the Blue Angels are very good at what they do. They are able to fly very close to each other and do very difficult tricks. They are most famous for the flyovers they do at many American sporting events.

All content from Kiddle encyclopedia articles (including the article images and facts) can be freely used under Attribution-ShareAlike license, unless stated otherwise. Cite this article:
Blue Angels Facts for Kids. Kiddle Encyclopedia.