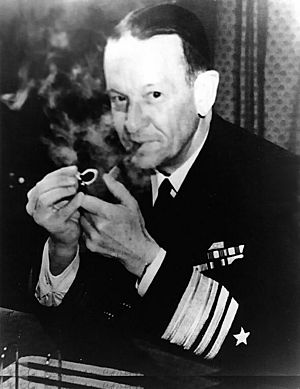 Frank Jack Fletcher (29 April 1885 - 25 April 1973) was an Admiral in the United States Navy. He was born at Marshalltown, Iowa, of the same family line as Captain Frank "Pat" Fletcher and of Rear Admiral Frank Friday Fletcher, noted men in the Navy. He attended the Naval Academy at Annapolis, Maryland and had jobs on many warships. In 1914 he got the Medal of Honor at Vera Cruz. Then he was in control of a destroyer in World War I received the Navy Cross. Later he took Naval and Army War College training, became chief of staff Asiatic Fleet, aide to Secretary of the Navy Swanson, and Commanding Officer of battleship New Mexico. He became Rear Admiral in control of Cruiser Division 3 in 1939. He was Commander of Cruisers, Pacific Fleet at the time of Pearl Harbor. In the very bad, first six months of the war, he was Task Force Commander at the Battle of Coral Sea, the Battle of Midway, and the Battle of Eastern Solomons. Vice Admiral Fletcher then became Commander North Pacific Forces where he took the surrender of the Imperial Northern Fleet. After the war he became Chairman of the Navy General Board till he retired. Admiral Fletcher rests at Arlington National Cemetery.

"Frank Jack Fletcher, was the best fighting commander in the U.S. Navy in the twentieth century. He came out best in all three aircraft carrier battles in which he fought -- there were only five such fights in of all history. Admiral Fletcher was outnumbered at all times and when the other side was at its highest point in the early years of the Pacific War. He did not let the other side take Australia, Midway, and Guadalcanal. He put down six of the ten Japanese carriers with four of the six great carriers that had attacked Pearl Harbor. His acts were completely his own, because there was no such thing as carrier fighting experience before him to learn to fight ships from the air. He kept the Pacific safe which let much support to go to Europe and started the Allied victory in World War II."

All content from Kiddle encyclopedia articles (including the article images and facts) can be freely used under Attribution-ShareAlike license, unless stated otherwise. Cite this article:
Frank Jack Fletcher Facts for Kids. Kiddle Encyclopedia.