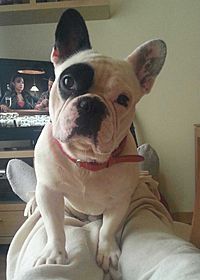 The French Bulldog is a breed of domestic dog. They are a cross between Toy Bulldogs imported from England and local ratters in Paris, France, in the 1800s.

All content from Kiddle encyclopedia articles (including the article images and facts) can be freely used under Attribution-ShareAlike license, unless stated otherwise. Cite this article:
French Bulldog Facts for Kids. Kiddle Encyclopedia.